Bravo Two Zero: The Harrowing True Story of a Special Forces Patrol Behind the Lines in Iraq (Mass Market) 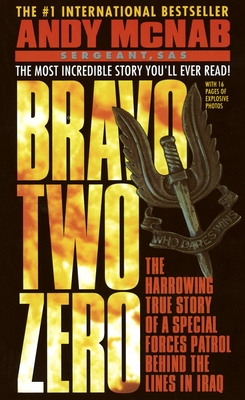 Bravo Two Zero: The Harrowing True Story of a Special Forces Patrol Behind the Lines in Iraq (Mass Market)


Not On Our Shelves—Ships in 1-5 Days
Their mission: To take out the scuds. Eight went out. Five came back. Their story had been closed in secrecy. Until now. They were British Special Forces, trained to be the best. In January 1991 a squad of eight men went behind the Iraqi lines on a top secret mission. It was called Bravo Two Zero. On command was Sergeant Andy McNab. "They are the true unsung heroes of the war." -- Lt. Col. Steven Turner, American F-15E commander. Dropped into "scud alley" carrying 210-pound packs, McNab and his men found themselves surrounded by Saddam's army. Their radios didn't work. The weather turned cold enough to freeze diesel fuel. And they had been spotted. Their only chance at survival was to fight their way to the Syrian border seventy-five miles to the northwest and swim the Euphrates river to freedom. Eight set out. Five came back. "I'll tell you who destroyed the scuds -- it was the British SAS. They were fabulous." -- John Major, British Prime Minister. This is their story. Filled with no-holds-barred detail about McNab's capture and excruciating torture, it tells of men tested beyond the limits of human endurance... and of the war you didn't see on CNN. Dirty, deadly, and fought outside the rules.
ANDY MCNAB joined the infantry as a boy soldier. In 1984 he was ‘badged’ as a member of 22 SAS Regiment and was involved in both covert and overt special operations worldwide. Awarded both the Distinguished Conduct Medal (DCM) and Military Medal (MM) during his military career, McNab was the British Army’s most highly decorated serving soldier when he finally left the SAS in February 1993. He wrote about his experiences in two phenomenal bestsellers, Bravo Two Zero, which was filmed starring Sean Bean, and Immediate Action.

He is the author of the thrillers, Remote Control, Crisis Four, Firewall, Last Light, Liberation Day, Dark Winter, Deep Black, Aggressor, Recoil and Crossfire. Besides his writing work, he lectures to security and intelligence agencies in both the USA and UK. He is also patron of the Help for Heroes campaign.