The Wheel of Osheim (The Red Queen's War #3) (Mass Market) 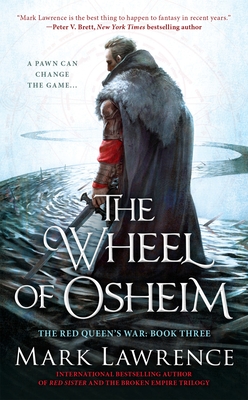 The Wheel of Osheim (The Red Queen's War #3) (Mass Market)


Backordered
From the international bestselling author of the Broken Empire Trilogy, the thrilling conclusion to the Red Queen’s War...

All the horrors of Hell stand between Snorri ver Snagason and the rescue of his family, if indeed the dead can be rescued. For Jalan Kendeth, getting out alive and with Loki’s key is all that matters. Loki’s creation can open any lock, any door, and it may also be the key to Jalan’s fortune back in the living world.

Jalan plans to return to the three w’s that have been the core of his idle and debauched life: wine, women, and wagering. Fate, however, has other plans, larger plans. The Wheel of Osheim is turning ever faster, and it will crack the world unless it’s stopped. When the end of all things looms, and there’s nowhere to run, even the worst coward must find new answers. Jalan and Snorri face many dangers, from the corpse hordes of the Dead King to the many mirrors of the Lady Blue, but in the end, fast or slow, the Wheel of Osheim always pulls you back. In the end, it’s win or die.
Mark Lawrence is a research scientist working on artificial intelligence. He is a dual national with both British and American citizenship, and has held secret-level clearance with both governments. At one point, he was qualified to say, “This isn’t rocket science—oh wait, it actually is.” He is the author of the Broken Empire trilogy (Prince of Thorns, King of Thorns, and Emperor of Thorns), the Red Queen’s War trilogy (Prince of Fools, The Liar’s Key, and The Wheel of Osheim) and the Book of the Ancestor series (Red Sister).
Praise for Mark Lawrence and The Red Queen’s War

“Lawrence’s epic fantasy is a great summer read, full of humor, revenge, and perils that this warrior-and-coward duo must evade in order [to] save their kingdoms and themselves.”—The Washington Post

“Jalan Kendeth is a fine addition to this Loki-like roster of tricksters, knaves, and cowards: heroes and antiheroes we love to hate and hate to love...Mark Lawrence’s growing army of fans will relish this rollicking new adventure and look forward to the next one.”—The Daily Mail

“As richly told as the earlier trilogy: The author makes this place, a post-cataclysm earth of the far future, feel as real as any place you’ve ever visited. For fans of the Broken Empire series and readers who enjoy a good, epic-sized fantasy story (readers of, say, George R. R. Martin), this is a must-read.”—Booklist

“Shrewd Jalan and honorable Snorri make a marvelous team, lightening a very dark story with wry humor. The brisk adventure and black magic will leave readers eager for the next chapter in the series.”—Publishers Weekly