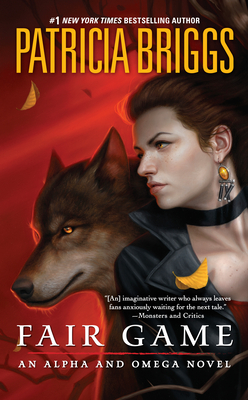 This is book number 3 in the Alpha and Omega series.

It is said that opposites attract. And in the case of werewolves Anna Latham and Charles Cornick, they mate. The son—and enforcer—of the leader of the North American werewolves, Charles is a dominant Alpha. While Anna, an Omega, has the rare ability to calm others of her kind.

When the FBI requests the pack’s help on a local serial-killer case, Charles and Anna are sent to Boston to join the investigation. It soon becomes clear that someone is targeting the preternatural. And now Anna and Charles have put themselves right in the killer’s sights...
Patricia Briggs is the #1 New York Times bestselling author of the Mercy Thompson urban fantasy series and the Alpha and Omega novels.
“The Alpha and Omega series gets its next transfixing installment as Anna and Charles undertake a critical assignment. This procedural hunt for a serial killer is mesmerizing and breathtakingly intense. Briggs never disappoints!”—RT Book Reviews

More Praise for the Alpha and Omega Novels

“Briggs has created such a detailed and well thought out world that I am helpless to resist.”—Fiction Vixen

“[Briggs] spins tales of werewolves, coyote shifters and magic and, my, does she do it well...If you like action, violence, romance and, of course, werewolves, then I urge you to pick up this series.”—USATODAY.com