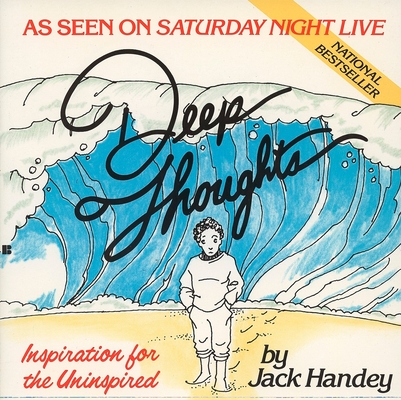 
Special Order—Subject to Availability
A national bestselling collection of comedian Jack Handey’s “Deep Thoughts”—short, funny observations on life that were shown in between sketches on Saturday Night Live.

With quirky, offbeat humor that often veers into the unexpected, Jack Handey’s witty one liners make this book the perfect funny gift for fans of Mitch Hedberg or for anyone who appreciates a good dad joke.

Includes daily “wisdom” such as:

“If you ever fall off the Sears Tower, just go real limp, because maybe you'll look like a dummy and people will try to catch you because, hey, free dummy.”

“It takes a big man to cry, but it takes a bigger man to laugh at that man.”
Jack Handey is an American humorist and author. He is best known for Deep Thoughts by Jack Handey, which appeared on Saturday Night Live. His other books include The Stench of Honolulu, What I’d Say to the Martians, Deeper Thoughts, All New, and Deepest Thoughts: So Deep They Squeak.