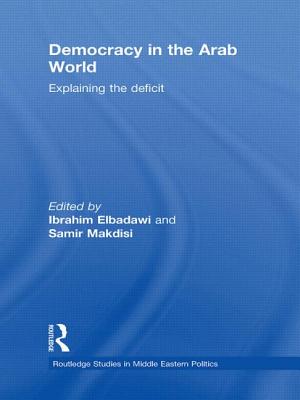 Despite notable socio-economic development in the Arab region, a deficit in democracy and political rights has continued to prevail. This book examines the major reasons underlying the persistence of this democracy deficit over the past decades and touches on the prospects for deepening the process of democratization in the Arab World.

Contributions from major scholars in the region give a cross country analysis of economic development, political institutions and social factors, and the impact of oil wealth and regional wars, and present a model for democracy in the Arab world. Case studies are drawn from Algeria, Egypt, Iraq, Jordan, Lebanon, Syria, Sudan and the Gulf region, building on these cross-country analyses and probing beyond the model's main global variables. Looking beyond the effect of oil and conflicts, the chapters illustrate how specific socio-political history of the country concerned, fear of fundamentalist groups, collusion with foreign powers and foreign interventions, and the co-option of the elites by the state contribute to these problems of democratization.

Situating the democratic position of the Arab World in a global context, this book is an important contribution to the field of Middle Eastern politics, development studies, and studies on conflict and democracy.

Samir Makdisi is Professor Emeritus of Economics, Distinguished Senior Fellow, Issam Fares Institute for Public Policy and International Relations, and Founding Director at the Institute for Financial Economics at the American University of Beirut. He has served as Deputy President of AUB; as chair of the Board of Trustees at the Economic Research Forum for the Arab Countries, Iran and Turkey; on the Board of the Global Development Network; and as Minister of Economy and Trade for the Republic of Lebanon.Ibrahim Elbadawi is Lead Economist at the Development Research Group of the World Bank. Until recently he was Lead Economist at the Development Research Group of the World Bank and has published widely on macroeconomic and development policy. His regional specialization covers Africa and the Middle East, where he is widely networked with academic research and policy forums in the two regions. He is also a visiting research fellow with the Center for Global Development and an Associate Editor of the Middle East Development Journal.