Chasing Light: Michelle Obama Through the Lens of a White House Photographer (Hardcover) 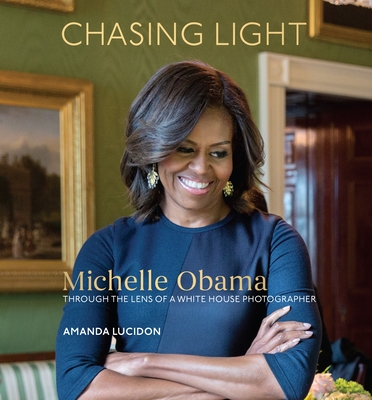 Chasing Light: Michelle Obama Through the Lens of a White House Photographer (Hardcover)


In Stock—Click for Locations
A New York Times Best Seller

A collection of striking and intimate photographs of Michelle Obama—many never before seen—coupled with personal reflections and behind-the-scenes stories from Official White House Photographer Amanda Lucidon, presented in a deluxe format.

Michelle Obama is one of the most admired First Ladies in history, known for her grace, spirit, and beauty, as well as for the amazing work she did during her tenure to promote girls’ education, combat childhood obesity, and support military families. In Chasing Light, former White House photographer Amanda Lucidon, who spent four years covering the First Lady, shares a rare insider’s perspective, from documenting life at the White House to covering domestic and overseas travel. This collection of 150 candid photos—many previously unreleased—and Amanda’s narrative reflections reveal just what makes Mrs. Obama so special. From an affectionate moment with her daughters atop the strikingly empty Great Wall of China to exuberant moments with schoolchildren and quiet moments between the First Lady and President Obama, the photos are a vibrant, candid, and beautiful celebration of the First Lady, capturing the qualities and strengths that have made Mrs. Obama so beloved.
AMANDA LUCIDON is an award-winning documentarian, filmmaker, and former freelance New York Times photographer who served as one of the White House photographers responsible for photographing First Lady Michelle Obama from 2013 to 2017. She is one of only a few female White House photographers in history and was the only woman photographer during her time in the Obama White House. Amanda attended Indiana University of Pennsylvania, where she studied communications media and journalism; she also studied photography at the Art Institute of Philadelphia. Amanda’s work has been honored by Pictures of the Year International, National Press Photographers Association Best of Photojournalism, and the White House News Photographers Association, among others. She was recently named a Turnaround Artist, one of seventy artists working to infuse the arts into struggling schools as part of a nationwide program founded by former First Lady Michelle Obama and the President’s Committee on the Arts and the Humanities and now run by the John F. Kennedy Center for the Performing Arts. She is currently a photographer, filmmaker, and public speaker based in Washington, D.C. To learn more about her work visit chasinglightbook.org.

“This awesome collection of images reminds us of how powerful the role of First Lady has evolved to become. Michelle Obama’s optimistic outreach toward achievable goals—in education, environmental stewardship, and healthy living—gave people an infusion of hope and can-do   encouragement. The photographs of Amanda Lucidon capture the sparkling moments of Michelle Obama’s memorable time in the White House. It is a joyous collection.”
—Meryl Streep

“Michelle Obama, with dignity, grace, and respect, has taught and inspired all of us to chase what is good, right, and just. Through her life’s commitment and dedication, she is the embodiment of a powerful light.”
—Congressman John Lewis

“Chasing Light is a remarkable and intimate behind-the-scenes look at one of the most influential icons of our time. Michelle Obama is dedicated, gracious, and humble. She has touched so many lives and continues to profoundly affect our world in the most genuine and positive ways. This book is an outstanding tribute to our beloved First Lady, and my friend, Michelle Obama.”
—Kerry Washington

“As a member of the President’s Committee on the Arts and the Humanities, I had the pleasure of seeing firsthand the wonderful effects of Michelle Obama’s work on behalf of underserved schoolchildren. Under her leadership, the classroom became an opportunity not just for learning, but also for innovation and creative expression.”
—Yo-Yo Ma

“Michelle Obama’s efforts redefined the role of First Lady and have left an imprint on the world like no other. As I turn through the pages of this beautiful book, I am reminded of the joy she shares with the world and the grace and humility she exudes. Her spirit and her legacy are captured in these photos.”
—Lonnie G. Bunch III, founding director of the National Museum of African American History and Culture, Smithsonian Institution