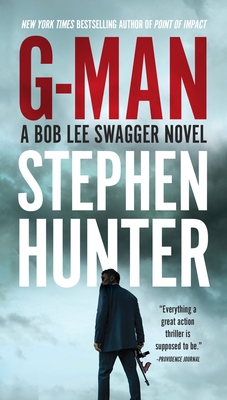 This is book number 10 in the Bob Lee Swagger series.

The Great Depression was marked by an epidemic of bank robberies and Tommy-gun-toting outlaws who became household names. Hunting them down was the new U.S. Division of Investigation--soon to become the FBI--which was determined to nab the most dangerous gangster this country has ever produced: Baby Face Nelson. To stop him, the Bureau recruited talented gunman Charles Swagger, World War I hero and sheriff of Polk County, Arkansas.

Eighty years later, Charles's grandson Bob Lee Swagger uncovers a strongbox containing an array of memorabilia dating back to 1934--a federal lawman's badge, a .45 automatic preserved in cosmoline, a mysterious gun part, and a cryptic diagram--all belonging to Charles Swagger. Bob becomes determined to find out what happened to his grandfather-- and why his own father never spoke of Charles. But as he investigates, Bob learns that someone is following him--and shares his obsession.

Told in alternating timeframes, G-Man is a thrilling addition to Stephen Hunter's bestselling Bob Lee Swagger series.
Stephen Hunter is the author of 20 novels and the retired chief film critic for The Washington Post, where he won the 2003 Pulitzer Prize for Distinguished Criticism. His novels include The Third Bullet; Sniper's Honor; I, Sniper; I, Ripper; and Point of Impact, which was adapted for film and TV as Shooter. Hunter lives in Baltimore, Maryland.
Praise for G-Man

“A first-rate tale that spans decades and generations....The pages fly by once the introductions are made and the characters are in place. Those who grew up watching The Untouchables or the plethora of gangster films that were made in the early and mid-20th century will find much to love here, not the least of which is the author's penchant for historical accuracy and firearms lore. This combination makes G-Man one of Hunter’s best works to date, which is certainly a major feat.”—Joe Hartlaub, BookReporter.com

“Hunter’s outstanding 10th Bob Lee Swagger novel (after 2014’s Sniper’s Honor) takes readers back to the gangster days of the 1930s...Hunter’s skilled ear for dialogue and idiom has never been better, and some of the action scenes—especially a chapter describing the famous robbery of the Merchants National Bank in South Bend, Ind., on June 30, 1934—are as elegant as they are disturbing.”—Publishers Weekly (starred review)

“Hunter fits the parts as snugly as Bob Lee reassembling a rifle...This is an outstanding thriller on every level.”—Booklist (starred review)

“Nobody writes action better than Stephen Hunter, and that action has never been better than in the scintillatingly superb G-Man....At heart G-Man is a modern day Western...with the two generations of Swaggers swapping sections as they command our attention in riveting fashion....G-Man is everything a great action thriller is supposed to be, presenting us with a series of targets Hunter manages to hit dead center every time. An old-fashioned shoot-em-up that is absolutely not to be missed.”—Jon Land, Providence Journal

“Hunter remains my only Pulitzer Prize-winning friend.  He has a new novel titled G-MAN, which I can highly recommend after having devoured it in a weekend.”—Mark A. Keefe IV, Editor-in-Chief, American Rifleman

“Fans of Hunter's Swagger family legend will be locked and loaded for more.”—Kirkus Reviews