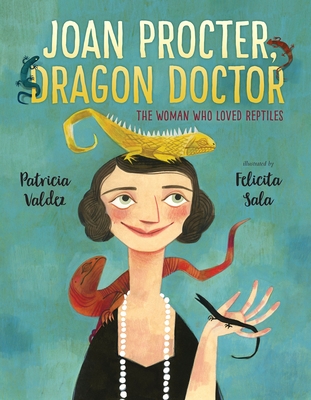 “I'm not sure if I love the illustrations or the text more, but together they're utterly engrossing. I love this book! Such a wonderful story and so well done. Inspiring!”
— Justus Joseph, The Elliott Bay Book Company, Seattle, WA

Back in the days of long skirts and afternoon teas, young Joan Procter entertained the most unusual party guests: slithery and scaly ones, who turned over teacups and crawled past the crumpets.... While other girls played with dolls, Joan preferred the company of reptiles. She carried her favorite lizard with her everywhere--she even brought a crocodile to school!

When Joan grew older, she became the Curator of Reptiles at the British Museum. She went on to design the Reptile House at the London Zoo, including a home for the rumored-to-be-vicious komodo dragons. There, just like when she was a little girl, Joan hosted children's tea parties--with her komodo dragon as the guest of honor.

A Chicago Public Library Best Book of the Year selection
Patricia Valdez is a scientist who loves writing for children. She earned her Ph.D. in Molecular and Cell Biology from the University of California, Berkeley and currently works at the National Institutes of Health. Originally from Texas, she now lives in the Washington, D.C. area. This is her first picture book.

Felicita Sala is a self taught illustrator who studied Philosophy at the University of Western Australia. She has worked on several animation projects, but her passion is making picture books. Felicita lives in Rome with her husband and their daughter. Visit her online at FelicitaSala.com, FelicitaSala.blogspot.com, and Instagram.com/felicita.sala/
"Whimsical artwork and an empowering story make this biography of a lesser-known woman scientist truly charming."—Booklist, starred review

"An inspirational biography with exciting depictions of a variety of reptiles, including a pet Komodo dragon, that will keep any child interested—whether reading on their own or with a group."—School Library Journal, starred review

"Valdez paints a portrait of a unique woman whose love for reptiles developed into a gratifying career."—Publishers Weekly, starred review