Who Was Duke Ellington? (Who Was?) (Paperback) 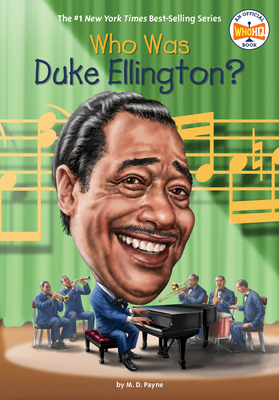 Who Was Duke Ellington? (Who Was?) (Paperback)


Not On Our Shelves—Ships in 1-5 Days
How did a working-class young man from Washington, DC, turn the music world on its head and become the "Master Of Jazz"? Find out in this addition to the Who HQ library!

A pivotal fixture of the Harlem Renaissance, Duke Ellington was the bandleader of the historic Cotton Club and a master composer -- writing close to 3,000 songs in his lifetime and capturing the spirit of the Black experience in the Unites States. Over a 50-year career, Ellington became one of the biggest names in jazz as we know it. He went on to win 13 Grammys, a Pulitzer, and receive the Presidential Medal of Freedom in 1969. Who Was Duke Ellington? follows the exciting, multifaceted journey of this musical genius and takes a look at what truly makes Ellington an artist "beyond category."
M. D. Payne was born in 1978 in New Hampshire to an Air Force Family and grew up in 11 different homes in Maine, California, Idaho, Florida, Virginia, Ohio, and Germany. As a child, he was a ravenous reader. While in elementary school, his favorite past-time was creating cut-and-paste scrapbooks of presidential facts that remain in his mother's possession today. M. D. has been a fan of Halloween and horror into adulthood, so he jumped at the chance to write marketing and creative copy for the famed GOOSEBUMPS series in 2007, and was soon pulled into the world of kidlit. He wrote his first books, the gross-out horror series MONSTER JUICE, from 2012-2014, and then became involved in the NY Times bestselling WHO WAS series, tackling spooky titles like Who Is R. L. Stine and What is the Story of Scooby Doo?

Before M. D. was a writer, he was a Jazz DJ, wrote scripts for Jazz at Lincoln Center Radio, and was associate producer on Essentially Ellington recordings and public radio programs such as Honky Tonks, Hymns, and the Blues and W.C. Handy's Blues. He took that decade of experience and poured it into the WHO WAS book on Jazz legend Duke Ellington. Who Was Duke Ellington? will be available December 1, 2020.

A fan of kids, reading, and especially kids who read, M. D. gives presentations on reading and writing to children and parents alike at numerous schools around the country, and around the world via Skype. He lives in New Jersey with his wife and two daughters.