The U.S. Constitution for Everyone: Features All 27 Amendments (Paperback) 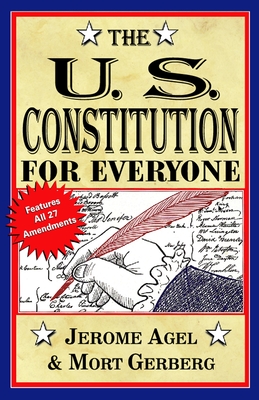 The U.S. Constitution for Everyone: Features All 27 Amendments (Paperback)

By Jerome B. Agel, Mort Gerberg


Special Order—Subject to Availability
History comes alive in this illustrated guide to the Constitution and all 27 Amendments.

The Constitution has been in the news a lot recently. But most of us could probably use a refresher on this founding document of America--you can probably name the first and second amendments, but what about the 11th, or the 22nd? And what does all of that formal political language actually mean for us today?

The U.S. Constitution for Everyone answers these questions and more, like:
- How does impeachment work, anyway?
- How long is a Senator's term?
- What is covered by "freedom of speech"?
- What are "emoluments"?
- How exactly does a bill become a law?

This book makes understanding your rights easy with clear explanations of the complete text of the U.S. Constitution, as well as all 27 Amendments, alongside fascinating historical facts and explanations.

A must-read for students, curious citzens, and everyone who'd like to know more about the supreme laws of our nation.
Jerome B. Agel is the author of The U.S. Constitution for Everyone; The U.S. Declaration of Independence for Everyone; We, the People; The Making of Kubrick's 2001; Fasting; and many more. Agel was a graduate of the University of Vermont and Columbia School of Journalism. Agel died in 2007.

Mort Gerberg is a cartoonist and author known for his cartoons in The New Yorker, Playboy, and other publications. He was voted the Best Magazine Cartoonist in 2007 and 2008 by the National Cartoonists Society. Gerberg is also an extremely respected public speaker, focusing on the subjects of creativity and positive aging. Gerberg is a contributor of Last Laughs: Cartoons About Aging, Retirement. . . and the Great Beyond, Joy in Mudville: The Big Book of Baseball Humor, Mr. Skinner's Skinny House, and more.