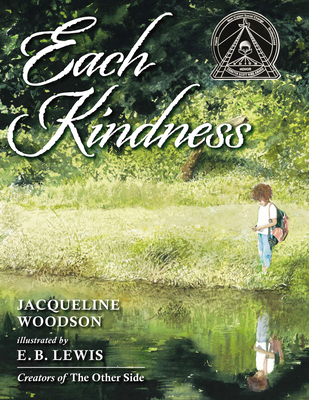 
In Stock—Click for Locations
WINNER OF A CORETTA SCOTT KING HONOR AND THE JANE ADDAMS PEACE AWARD!

Each kindness makes the world a little better

This unforgettable book is written and illustrated by the award-winning team that created The Other Side and the Caldecott Honor winner Coming On Home Soon. With its powerful anti-bullying message and striking art, it will resonate with readers long after they've put it down.

Chloe and her friends won't play with the new girl, Maya. Every time Maya tries to join Chloe and her friends, they reject her. Eventually Maya stops coming to school. When Chloe's teacher gives a lesson about how even small acts of kindness can change the world, Chloe is stung by the lost opportunity for friendship, and thinks about how much better it could have been if she'd shown a little kindness toward Maya.
Jacqueline Woodson (www.jacquelinewoodson.com) is the recipient of a 2020 MacArthur Fellowship, the 2020 Hans Christian Andersen Award, the 2018 Astrid Lindgren Memorial Award, and the 2018 Children’s Literature Legacy Award. She was the 2018–2019 National Ambassador for Young People’s Literature, and in 2015, she was named the Young People’s Poet Laureate by the Poetry Foundation. She received the 2014 National Book Award for her New York Times bestselling memoir Brown Girl Dreaming, which was also a recipient of the Coretta Scott King Award, a Newbery Honor, the NAACP Image Award, and a Sibert Honor. She wrote the adult books Red at the Bone, a New York Times bestseller, and Another Brooklyn, a 2016 National Book Award finalist. Born in Columbus, Ohio, Jacqueline grew up in Greenville, South Carolina, and Brooklyn, New York, and graduated from college with a B.A. in English. She is the author of dozens of award-winning books for young adults, middle graders, and children; among her many accolades, she is a four-time Newbery Honor winner, a four-time National Book Award finalist, and a three-time Coretta Scott King Award winner. Her books include Coretta Scott King Award winner Before the Ever After; New York Times bestsellers The Day You Begin and Harbor Me; The Other Side, Each Kindness, Caldecott Honor book Coming On Home Soon; Newbery Honor winners Feathers, Show Way, and After Tupac and D Foster; and Miracle's Boys, which received the LA Times Book Prize and the Coretta Scott King Award. Jacqueline is also a recipient of the Margaret A. Edwards Award for lifetime achievement for her contributions to young adult literature and a two-time winner of the Jane Addams Children's Book Award. She lives with her family in Brooklyn, New York.

E. B. Lewis has illustrated more than fifty picture books, including Coretta Scott King Illustrator Award winner Talkin' About Bessie (by Nikki Grimes) and Caldecott Honor winner Coming On Home Soon (by Jacqueline Woodson). He taught art in public schools for twelve years, and currently teaches at the University of Arts in Philadelphia. He lives in Folsom, New Jersey.
* "This quiet, intense picture book is about the small actions that can haunt. . . . Woodson's spare, eloquent free verse and Lewis' beautiful, spacious watercolor paintings tell a story for young kids that will touch all ages." — Booklist, starred review

"Unfolds with harsh beauty and the ominousness of opportunities lost. . . . The matter-of-fact tone of Chloe's narration paired against the illustrations' visual isolation of Maya creates its own tension. . . . Lewis dazzles with frame-worthy illustrations, masterful use of light guiding readers' emotional responses." — Kirkus Reviews

* “Always on-target navigating difficulties in human relationships, Woodson teams up with Lewis to deal a blow to the pervasive practice–among students of all economic backgrounds–of excluding those less fortunate. . . . Lyrical and stylistically tight writing act in perfect counterpoint to the gentle but detailed watercolor paintings. . . . Gives opportunity for countless inferences and deep discussion . . . invite[s] readers to pause, reflect, and empathize. . . . With growing income disparity, and bullying on the rise, this story of remorse and lost opportunity arrives none too soon.” — School Library Journal, starred review

“Woodson’s fluid writing and deft particularity makes the girls’ bullying rebuffs of Maya absolutely heartbreaking. . . . In his watercolors, Lewis embraces the effects of light like an Impressionist, while his creative, often cinematic uses of point of view add resonance to the story. . . . Offers an alternative view to rosier stories of forgiveness and bully-victim friendships.” — The Bulletin of the Center for Children's Books

“Beautifully heartbreaking . . . sure to touch a tender spot. . . . The situation should resonate with young people who are sure to recognize themselves in either Chloe or Maya. Lovely watercolors perfectly complement this simple yet strong story.” — Library Media Connection

“Woodson’s affecting story, with its open ending, focuses on the withholding of friendship rather than outright bullying, and Lewis reflects the pensive mood in sober watercolors . . . in subtly detailed portraits. . . . A good conversation starter.” — The Horn Book