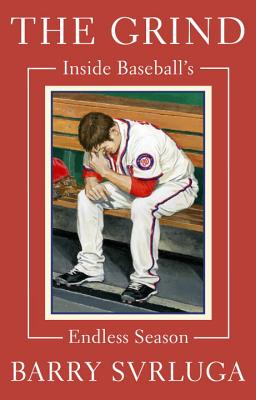 Shortlisted for the 2016 PEN/ESPN Award for Literary Sports Writing

AT 162 GAMES, it is the sports world's longest season. Grueling. Thrilling. Routine. Lonely. Exhilarating. Major league ballplayers even have a name for this relentless, unmatchable rhythm: The Grind. In The Grind, Barry Svrluga, The Washington Post's national baseball correspondent, zooms in on the 2014 Washington Nationals, reporting not just on the roster's star players, but also on the typically invisible supporting cast who each have their own sacrifices to make and schedules to keep. There's The Wife, who acts as a full-time mom, part-time real estate agent, occasional father, and all-hours dog walker; The 26th Man, a minor leaguer on the cusp of job security who gets called up to the majors only to be sent back down the very next week; The Reliever, one of the most mentally taxing, precarious, and terribly exposed positions on any pro squad. These and many more players, scouts, equipment managers, and even travel schedulers create the fabric of Svrluga's intimate and unusual book; they could be from any team or any big-league city. As he writes: "There is no other sport with an everydayness, a drum-drum-drum beat like baseball." Built on material that appeared in The Washington Post, Svrluga's book is a raw, inside look at the wear and tear, the glory and impermanence, of America's pastime.
Barry Svrluga has worked at the Washington Post since 2003 and is currently the national baseball writer. He previously reported on and blogged about the Washington Nationals and is the author of National Pastime, which details the franchise's relocation from Montreal and its first season in the nation's capital. He lives in Washington, D.C., with his wife and daughter.
For This Book...
Staff Pick