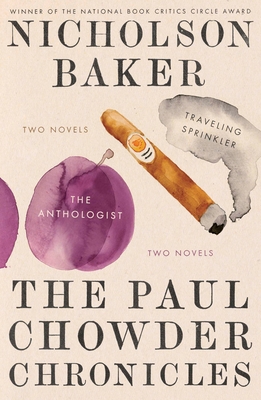 
Special Order—Subject to Availability
TOGETHER FOR THE FIRST TIME, BOTH OF NICHOLSON BAKER’S BRILLIANT NOVELS FEATURING BELOVED HERO AND POET PAUL CHOWDER

A New York Times notable book and a national bestseller, Nicholson Baker’s The Anthologist introduces his quirkiest and most unforgettable protagonist yet, the “erudite, unpretentious, and often hilarious” (The New Yorker) Paul Chowder.

Chowder really needs to write an introduction to his new anthology of verse, Only Rhyme—it’s the first work his editor has sent him in months—but he’s having a hard time getting started. Not only is his career floundering, but his girlfriend, Roz, just moved out. Perhaps unsurprisingly, Chowder can’t keep his mind from drifting to the sufferings of the great poets, from Tennyson and Yeats to Roethke, Merwin, to every poet who’s been published in The New Yorker. As he ponders the strange power and musicality of language, and adjusts to his newly single life, Chowder’s introduction slowly but surely begins to take shape.

A wholly entertaining and beguiling love story, and the first novel in the chronicles of Paul Chowder—which is followed by Traveling Sprinkler in this same volume—The Anthologist is “a loving and superbly witty homage to poetryand to life” (The Boston Globe).
NICHOLSON BAKER is the author of ten novels, including The Anthologist, Vox, and The Fermata, and five works of nonfiction, including Human Smoke and Double Fold (winner of the National Book Critics Circle Award). He lives in Maine.