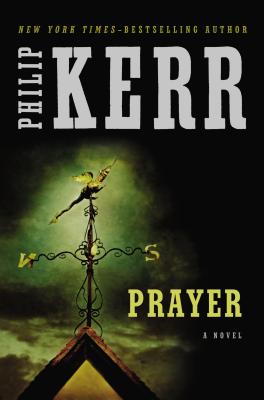 
Special Order—Subject to Availability
From"New York Times"-bestselling author Philip Kerr comes an amazing departure: an intense psychological thriller, sure to garner even more acclaim for this powerhouse author on the rise.
Gil Martins, an agent with the FBI's Domestic Terrorism Unit in Houston, confronts the violence generated by extremism within our nation's borders every day. He sees hatred and destruction wrought by every kind of ism there is, and the zealots who kill in their names. Until now, he has always been a part of the solution however imperfect a part of justice. But when Gil discovers he played a key role in wrongly condemning an innocent man to death row, it shakes his faith in the system, in himself, and in God deeply. It even estranges him from his wife and son.

Desperate, Gil offers up a prayer. To know God is there, not through a sign or physical demonstration but through the strength to cope with his ever-growing, ever-creeping doubts.

His problems become more than personal as things heat up in Houston. A serial killer terrorizing the morally righteous turns out to have religious motivations, upping the case from homicide to domestic terrorism. A number of prominent secular icons die or are grievously injured abruptly and under suspicious circumstances, the latest of which is a New Atheist writer who's fallen into an inexplicable coma. Left and right, it seems Gil can t escape the power of God and murder.

As Gil investigates both cases, he realizes that there may be a connection answering his prayers in a most terrifying way.

Philip Kerris the author of the Bernie Gunther series as well as several dystopian futuristic novels, standalone thrillers, and the young adult series"Children of the Lamp." He lives in London with his wife and children."

PRAYER “A real page-turner that may just have everyone rethinking the monumental power that faith can provide or…take away in the blink of an eye.” —Suspense Magazine

“Provocative... Evocative phrasing is another plus in this exceptional thriller.” —Publishers Weekly

“Here moral complexity is raised to a new high in a contemporary psychological thriller that is eerily terrifying and disturbing”
— Library Journal, starred review

“A compelling and unsettling change of pace for the popular Kerr.”
— Booklist

“A rum beast that uses the cosy familiarity of the thriller form to buttress a fantastical supernatural plot...As fans of his Berlin-set Bernie Gunther novels will know, Kerr is a details man. His deep-level research brings Houston and its environs to dusty, sun-bleached life. Martins’ narration, too, is deftly handled –Prayer demands to be read more than once.” —The Guardian

“When Kerr goes off-piste, as he does here, the freedom sends his imagination into some very peculiar places. Who else could make a crackling thriller out of the current debate between religion and atheism?...What if the Almighty exists, but is horrible? The story unfolds at a white-knuckle pace, with a sense of the unknown that is genuinely disturbing.”  —  The Sunday Times

A MAN WITHOUT BREATH   “This is the most intelligent brand of crime fiction, and there is moral complexity here in spades.”—The Daily Beast
“A Man Without Breath is a masterful accomplishment that delivers a gripping mystery wrapped around meticulously researched history…It brings the deadly past to life.”—The Arizona Republic
“One of these days World War II will come to an end, and then how will we manage without Bernie Gunther, the cynical Berlin cop who has somehow contrived to stay alive and retain some vestige of personal integrity in Philip Kerr’s harrowing historical thrillers?”—The New York Times Book Review
“This ninth Bernie Gunther tale (after Prague Fatale) focuses on two months of 1943, mixing real-life characters with fictional ones. Kerr’s historical knowledge and writing skills merge these elements seamlessly in a gripping story of murder, but it is Bernie who holds it all together even as he questions the absurdity of attempting normalcy during war. Mystery, historical fiction, and military history buffs will join existing Bernie fans in welcoming this latest installment in the series.”—Library Journal
“Captivating . . . Kerr makes everything look easy, from blending history with a clever and intricate whodunit plot to powerful descriptions of cruelty.”—Publishers Weekly (starred review)
“Kerr’s sketch of Goebbels dazzles. The author pulls the reader down into the dark underground of Der Führer’s rabbit hole of totalitarian horror . . . [A Man Without Breath] masterfully explores morality's shadowy gray edge.”—Kirkus