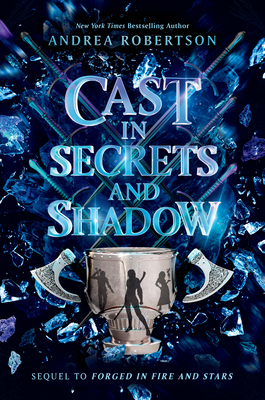 This is book number 2 in the Loresmith series.

Game of Thrones meets Shadow and Bone in the second book in this action-packed fantasy from Andrea Robertson, the internationally bestselling author of the Nightshade series.

Ara has taken up her mantle as the Loresmith--but her journey is far from over. After suffering betrayals and losses, Ara, Nimhea, Lahvja, and Teth must try to come together and find the Loreknights across the kingdom. The Loreknights are their only hope in overthrowing the evil Vokkans and putting Nimhea on the throne for good. But their journey will put Ara and her companions in grave danger--from the endless pursuit of the Vokkans to perilous encounters with the gods, and the near impossible trials they face along the way--will they be able to survive long enough to help the rebellion?

And through it all the Vokkans are expanding their reach throughout Saetlund, putting everyone Ara and her friends love at risk. Only Ara can forge a way forward, take up her powers, and fight to change the world--no matter what it costs.

From internationally bestselling author Andrea Roberston comes the second book in a gorgeously written new fantasy series perfect for readers of Leigh Bardugo's Shadow and Bone or Sabaa Tahir's An Ember in the Ashes series.
Andrea Roberston is the internationally bestselling author of the Nightshade series and of Invisibility, which she co-wrote with David Levithan. She is also the author of the Inventor's Secret trilogy and Forged in Fire and Stars. Originally from Minnesota, she now lives in California.
"This steady follow-up to Forged in Fireand Stars (2020) expands the world building just enough to keep readers on the hook for more." --Booklist