The Secret Hum of a Daisy (Hardcover) 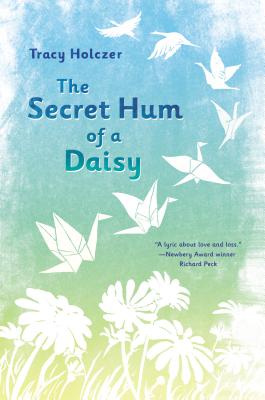 The Secret Hum of a Daisy (Hardcover)


Special Order—Subject to Availability
Twelve-year-old Grace and her mother have always been their own family, traveling from place to place like gypsies. But Grace wants to finally have a home all their own. Just when she thinks she's found it her mother says it's time to move again. Grace summons the courage to tell her mother how she really feels and will always regret that her last words to her were angry ones.

After her mother's sudden death, Grace is forced to live with a grandmother she's never met. She can't imagine her mother would want her to stay with this stranger. Then Grace finds clues in a mysterious treasure hunt, just like the ones her mother used to send her on. Maybe it is her mother, showing her the way to her true home.

★ "Holczer expertly crafts the characters and dialogue to create a story readers will identify with, and thoroughly enjoy… More than simply a book about grief and the death of a parent, Grace’s story is about the search for identity. An essential purchase for middle-grade collections."—School Library Journal, starred review

"In this debut novel, Holczer presents a tender, transformative exploration of family, loss and reconciliation."—Kirkus Reviews

"Holczer weaves healing symbols… and poetry into her lyrical text… in this heartfelt debut about loss and love."—The Horn Book

"Readers who appreciate the quiet confidence and maturity of Cynthia Rylant’s, Patricia MacLachlan’s, and Katherine Paterson’s protagonists will find a new author to enjoy."—Booklist
For This Book...
Staff Pick