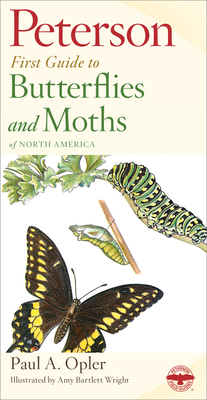 By Roger Tory Peterson (Editor), Paul A. Opler, Amy Bartlett Wright (Illustrator)
List Price: $8.99
Our Price: $7.95
(Save: $1.04 12%)
In Stock—Click for Locations
Peterson First Guides are the first books the beginning naturalist needs. Condensed versions of the famous Peterson Field Guides, the First Guides focus on the animals, plants, and other natural things you are most likely to see. They make it fun to get into the field and easy to progress to the full-fledged Peterson Guides.
ROGER TORY PETERSON, one of the world’s greatest naturalists, received every major award for ornithology, natural science, and conservation as well as numerous honorary degrees, medals, and citations, including the Presidential Medal of Freedom. The Peterson Identification System has been called the greatest invention since binoculars.

Amy Bartlett Wright has contributed to the Peterson Field Guide series, and her illustrations have been exhibited at the Smithsonian's Ripley Center.