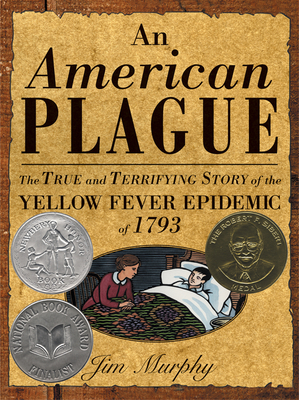 Powerful and riveting, this Newbery Honor–winning narrative describes the illness known as yellow fever, the toll it took on the nation’s capital—and the eventual triumph over the disease.

Long before Covid and the West Nile virus, yellow fever was a medical mystery that forced thousands in Philadelphia, the nation’s temporary capital, to flee and brought the workings of the federal government to a virtual halt. A riveting account of this country’s first large-scale medical epidemic, An American Plague is generously illustrated with archival prints and photographs and includes a bibliography, map, and index.

This is the story of how half the city’s residents fled and half of those who remained died; neighboring towns, cities and states barricaded themselves; George Washington himself fled, setting off a constitutional crisis; and bloodletting caused blood to run through the streets. It is also the story of a little known chapter in Black history in which free Blacks nursed the sick only to be later condemned for their heroic efforts.

Meticulously researched, first-hand accounts, newspaper clippings, death lists, and period engravings recreate the fear and panic while exploring the political, social, cultural, medical and scientific history of the times. A final chapter explores the causes of the epidemic and provides a wake-up call about the potential for epidemics today.

"Murphy's dramatic history book...brings to life the determination and perseverance of a people whose future was uncertain." — Christian Science Monitor