The Landing of the Pilgrims (Landmark Books) (Paperback) 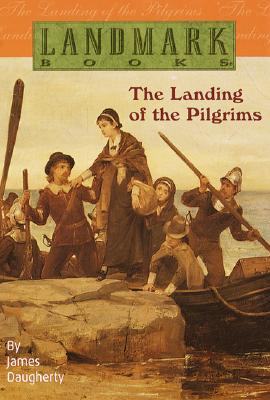 The Landing of the Pilgrims (Landmark Books) (Paperback)


Not On Our Shelves—Ships in 1-5 Days
Learn how and why the Pilgrims left England to come to America!

In England in the early 1600s, everyone was forced to join the Church of England. Young William Bradford and his friends believed they had every right to belong to whichever church they wanted. In the name of religious freedom, they fled to Holland, then sailed to America to start a new life. But the winter was harsh, and before a year passed, half the settlers had died. Yet, through hard work and strong faith, a tough group of Pilgrims did survive. Their belief in freedom of religion became an American ideal that still lives on today.

James Daugherty draws on the Pilgrims' own journals to give a fresh and moving account of their life and traditions, their quest for religious freedom, and the founding of one of our nation's most beloved holidays; Thanksgiving.
Born in 1889 in North Carolina, James Henry Daugherty studied art in Washington, DC, Philadelphia, and Europe. The author started his career doing advertising drawings in New York City. Soon afterward, he moved on to illustrating magazines, including the New Yorker, and painting large murals. He came into his own writing and illustrating books for young people—creating drawings for more than 90 books before his death in 1974. Among the many books Mr. Daugherty wrote and illustrated are Daniel Boone, a Newbery Medal winner, and Andy and the Lion, a Caldecott Medal runner-up.