The Barbarous Years: The Conflict of Civilizations, 1600-1675 (Hardcover) 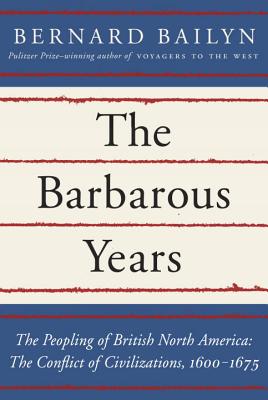 The Barbarous Years: The Conflict of Civilizations, 1600-1675 (Hardcover)


Special Order—Subject to Availability
Bernard Bailyn gives us a compelling account of the first great transit of people from Britain, Europe, and Africa to British North America, their involvements with each other, and their struggles with the indigenous peoples of the eastern seaboard.
They were a mixed multitude from England, the Netherlands, the German and Italian states, France, Africa, Sweden, and Finland. They moved to the western hemisphere for different reasons, from different social backgrounds and cultures, and under different auspices and circumstances. Even the majority that came from England fit no distinct socioeconomic or cultural pattern. They came from all over the realm, from commercialized London and the southeast; from isolated farmlands in the north still close to their medieval origins; from towns in the Midlands, the south, and the west; from dales, fens, grasslands, and wolds. They represented the entire spectrum of religious communions from Counter-Reformation Catholicism to Puritan Calvinism and Quakerism.
They came hoping to re-create if not to improve these diverse lifeways in a remote and, to them, barbarous environment. But their stories are mostly of confusion, failure, violence, and the loss of civility as they sought to normalize abnormal situations and recapture lost worlds. And in the process they tore apart the normalities of the people whose world they had invaded.
Later generations, reading back into the past the outcomes they knew, often gentrified this passage in the peopling of British North America, but there was nothing genteel about it. Bailyn shows that it was a brutal encounter brutal not only between the Europeans and native peoples and between Europeans and Africans, but among Europeans themselves. All, in their various ways, struggled for survival with outlandish aliens, rude people, uncultured people, and felt themselves threatened with descent into squalor and savagery. In these vivid stories of individual lives some new, some familiar but rewritten with new details and contexts Bailyn gives a fresh account of the history of the British North American population in its earliest, bitterly contested years.
Bernard Bailyn did his undergraduate work at Williams College and his graduate work at Harvard, where he is currently Adams University Professor and James Duncan Phillips Professor of Early American History Emeritus. His previous books include "The New England Merchants in the Seventeenth Century"; "Education in the Forming of American Society"; "The Ideological Origins of the American Revolution," which received the Pulitzer and Bancroft prizes; "The Ordeal of Thomas Hutchinson," which won the National Book Award for History; "Voyagers to the West," which won the Pulitzer Prize; "Faces of Revolution: Personalities and Themes in the Struggle for American Independence"; "To Begin the World Anew: The Genius and Ambiguities of the American Founders"; and "Atlantic History: Concept and Contours." In 2011 he received the National Humanities Medal.

“This weighty book distills a lifetime of learning of one of our most authoritative historians of colonial America. . . . A history of the colonies built up of brilliant portraits of the people who interacted in these strange and fearsome lands. . . . This is not your school-book colonial history. . . . Penetrating and stylish . . . An extraordinary work of profound seriousness, characteristic of its author.”
—Publishers Weekly (starred review)

“Drawing on decades of sound, dynamic research, the author has provided scholars and general readers alike with an insightful and engaging account of Colonial America that signals a reset on Colonial studies, the culmination of his work. An important book. . . . Superbly told.”
—Brian Odom, Library Journal (starred review)

“In Bailyn’s perceptive and erudite hands, the original British, Dutch, and Swedish ventures assume as wild and variegated guises as did the forceful individuals who embarked on them.”
—Gilbert Taylor, Booklist

“Bailyn spares no gory detail, but he treats his subjects with sympathy.”
—The New Yorker