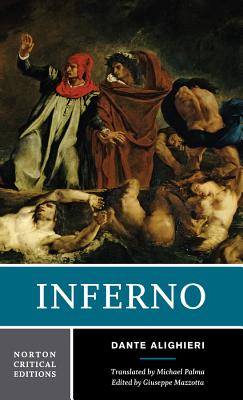 This Norton Critical Edition of Dante’s masterpiece is based on Michael Palma’s verse translation, which is acclaimed for its elegant rendering of Dante’s triple-rhyme scheme into contemporary English.

Richard Wilbur praises Palma’s translation as “accurate as to sense, fully rhymed, and easy, as a rule, in its movement through the tercets. Readers will find it admirably clear and readable.” The text is accompanied by detailed explanatory annotations. Also included in this edition are an illuminating introduction by Giuseppe Mazzotta, a Translator’s Note, The Plan of Dante’s Hell, and six maps and illustrations. “Criticism” provides twelve interpretations by, among others, John Freccero, Robert M. Durling, Alison Cornish, Teodolinda Barolini, Giuseppe Mazzotta, and Robert Hollander. A Chronology and Selected Bibliography are also included.

Dante Alighieri was born in 1265 in Florence to a family of minor nobility. He entered into Florentine politics in 1295, but he and his party were forced into exile in a hostile political climate in 1301. Taking asylum in Ravenna late in life, Dante completed his Divine Commedia, considered one of the most important works of Western literature, before his death in 1321.

Giuseppe Mazzotta is Sterling Professor of the Humanities for Italian at Yale University. He is president of the Dante Society of America (2003-2009). He is the author of Dante: Poet of the Desert and Dante’s Vision and the Circle of Knowledge.


Michael Palma is the recipient of the Italo Calvino Prize for his translation of My Name on the Wind: Selected Poems of Diego Valeri and of the Raiziss/de Palchi Translation Award from the Academy of American Poets for his translation of The Man I Pretend to Be: “The Colloquies” and Selected Poems of Guido Gozzano. Palma has published four collections of verse: The Egg Shape, Antibodies, A Fortune in Gold, and Begin in Gladness, and an Internet chapbook, The Ghost of Congress Street, as well as Faithful in My Fashion: Essays on the Translation of Poetry.