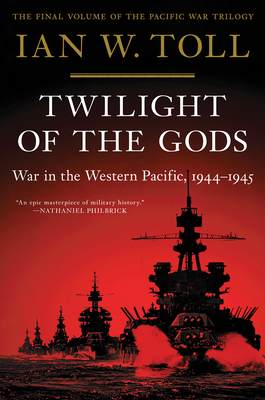 This is book number 3 in the The Pacific War Trilogy series.

“No one has told the story of World War II in the Pacific, from beginning to bitter end, better than Ian W. Toll. This final volume concludes a brilliant trilogy.”—Alex Kershaw, New York Times best-selling author of The First Wave and Avenue of Spies

In June 1944, the United States launched a crushing assault on the Japanese navy in the Battle of the Philippine Sea. The capture of the Mariana Islands and the accompanying ruin of Japanese carrier airpower marked a pivotal moment in the Pacific War. No tactical masterstroke or blunder could reverse the increasingly lopsided balance of power between the two combatants. The War in the Pacific had entered its endgame.

Beginning with the Honolulu Conference, when President Franklin Delano Roosevelt met with his Pacific theater commanders to plan the last phase of the campaign against Japan, Twilight of the Gods brings to life the harrowing last year of World War II in the Pacific, when the U.S. Navy won the largest naval battle in history; Douglas MacArthur made good his pledge to return to the Philippines; waves of kamikazes attacked the Allied fleets; the Japanese fought to the last man on one island after another; B-29 bombers burned down Japanese cities; and Hiroshima and Nagasaki were vaporized in atomic blasts.

Ian W. Toll’s narratives of combat in the air, at sea, and on the beaches are as gripping as ever, but he also reconstructs the Japanese and American home fronts and takes the reader into the halls of power in Washington and Tokyo, where the great questions of strategy and diplomacy were decided.

Drawing from a wealth of rich archival sources and new material, Twilight of the Gods casts a penetrating light on the battles, grand strategic decisions and naval logistics that enabled the Allied victory in the Pacific. An authoritative and riveting account of the final phase of the War in the Pacific, Twilight of the Gods brings Toll’s masterful trilogy to a thrilling conclusion. This prize-winning and best-selling trilogy will stand as the first complete history of the Pacific War in more than twenty-five years, and the first multivolume history of the Pacific naval war since Samuel Eliot Morison’s series was published in the 1950s.

Ian W. Toll is the author of the New York Times bestsellers The Conquering Tide, Pacific Crucible, and Six Frigates, winner of the Samuel Eliot Morison Award and the William E. Colby Award. He lives in New York.
No one has told the story of World War II in the Pacific, from beginning to bitter end, better than Ian W. Toll. This final volume concludes a brilliant trilogy. Elegant and supremely readable—don’t miss the finest military history of 2020.
— Alex Kershaw, New York Times best-selling author of The First Wave and Avenue of Spies

I’ve been a fan of Ian W. Toll’s since his first book, Six Frigates, but this concluding volume of his Pacific War Trilogy has taken him to another level altogether. Twilight of the Gods grabs you from the beginning and doesn’t let go until the very end—an epic masterpiece of military history.

— Nathaniel Philbrick, National Book Award–winning author of In the Heart of the Sea and finalist for the Pulitzer Prize

Toll’s expertly navigated narrative includes a number of new insights…It is exhaustive and authoritative and it shows the Navy in World War II as it really was, warts and all.
— Mark Perry - New York Times Book Review

[A] magnificent saga of the last year of the Pacific War…every bit as captivating as his first two [volumes]—Pacific Crucible and The Conquering Tide.

Toll weaves a brilliant final act depicting one of humanity’s epic tragedies. This book and its predecessors set a high bar for historians of the Pacific War.
— Jonathan W. Jordan - Wall Street Journal

Using meticulous research, including previously untapped primary sources, and a brisk narrative that combines strategic, operational, and personal perspectives, [Toll] presents a very balanced look at the critical decisions and actions on both sides that concluded the war.
— Jerry Lenaburg - New York Journal of Books

In his masterly narrative, Ian W. Toll brings clarity and a stinging immediacy to America’s long, bitter climb up the island ladder that led to Japan. With deft, incisive character sketches, Toll summons the leaders back to contentious life: arguing about what to do, making mistakes, bringing triumph out of disaster—and sometimes the reverse. This is maritime history at its best and most accessible.
— Richard Snow

Written with flair and chock-full of stories both familiar and fresh, this monumental history fires on all cylinders. WWII aficionados will be enthralled.
— Publishers Weekly (starred review)