The Age of Football: Soccer and the 21st Century (Hardcover) 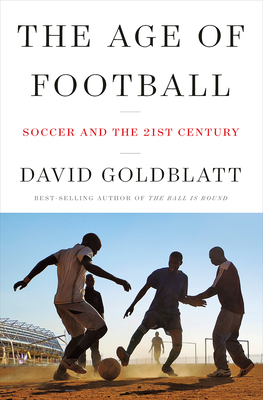 The Age of Football: Soccer and the 21st Century (Hardcover)

A monumental exploration of soccer and society in our time—by its preeminent historian.

In the twenty-first century, soccer commands the allegiance, interest, and engagement of more people in more places than any other phenomenon in the world. David Goldblatt—author of the acclaimed, best-selling The Ball Is Round—charts the sport’s global cultural ascent, economic transformation, and deep politicization.

Based on a decade of research and reporting, The Age of Football sheds light on the greatest issues of our time—including globalization, immigration, nationalism—and the role that soccer plays. From soccer’s connections to social discord in the Middle East as a site for protest and a tool for dictatorships to the reasons behind its surprising surge in popularity in China, India, and the United States, Goldblatt reveals that this massively popular sport is vital to understanding our social, political, and economic lives. Tracking the rise of interest in women’s teams throughout the world and the controversy imbedded in the domestic football associations emerging across nations in Africa, he explores the use (and misuse) of soccer in the global advancement of equality and human rights.

With breathtaking scope and unparalleled knowledge of the game, The Age of Football proves that whether you call it football or soccer, you can’t make sense of the modern world without understanding its most popular sport

David Goldblatt is the author of three acclaimed books about soccer, including the international bestseller The Ball Is Round. His podcast, Game of Our Lives, has recently been nominated for a Webby Award. He teaches at Pitzer College in Los Angeles and lives in Bristol, England.
Goldblatt’s work is invaluable for a wide swath of readers, from soccer fans to those with interests in politics, cultural studies, and social justice.
— Publishers Weekly

Superb: Essential reading not just for fans of the sport, but also for students of geopolitics.
— Kirkus Reviews (starred review)

A must for any sports collection.
— Booklist