Plenty of Time When We Get Home: Love and Recovery in the Aftermath of War (Paperback) 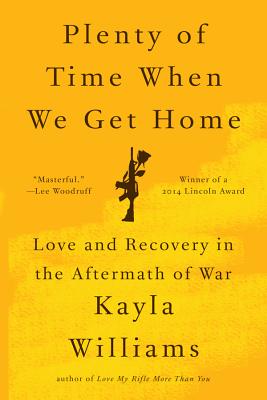 Plenty of Time When We Get Home: Love and Recovery in the Aftermath of War (Paperback)

“Intimate and brave . . . a testament to how love soldiers on.”—People

Brian, on his way back to base after mid-tour leave, was wounded by a roadside bomb that sent shrapnel through his brain. Kayla waited anxiously for news and, on returning home, sought out Brian. The two began a tentative romance and later married, but neither anticipated the consequences of Brian’s injury on their lives. Lacking essential support for returning veterans from the military and the VA, Kayla and Brian suffered through posttraumatic stress amplified by his violent mood swings, her struggles to reintegrate into a country still oblivious to women veterans, and what seemed the callous, consumerist indifference of civilian society at large.


Kayla persevered. So did Brian. They fought for their marriage, drawing on remarkable reservoirs of courage and commitment. They confronted their demons head-on, impatient with phoniness of any sort. Inspired by an unwavering ethos of service, they continued to stand on common ground. Finally, they found their own paths to healing and wholeness, both as individuals and as a family, in dedication to a larger community.

Kayla Williams, a former Arabic linguist in the U.S. Army, is the author of Love My Rifle More than You and Plenty of Time When We Get Home. She lives with her husband Brian and their two children in Virginia.
A must-read for military spouses, caregivers, and anyone hoping to gain an understanding of the challenges faced by soldiers coming home. Kayla and Brian’s perseverance is a tribute to the power of the human spirit to not only survive but to thrive.
— Marie Tillman, author of The Letter: My Journey Through Love, Loss & Life and founder of the Pat Tillman Foundation

Part heartache, hard truth, love story, and an insider’s look at the back end of war, this book offers us a look behind the uniforms and the parades and into the damage of war’s wounds. In the end, it is a story about how love can ultimately heal.
— Lee Woodruff, author of In an Instant and Those We Love Most