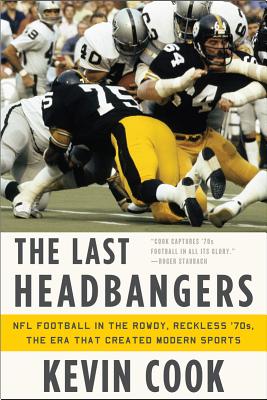 The inside story of the most colorful decade in NFL history—pro football’s raging, hormonal, hairy, druggy, immortal adolescence.

A former senior editor at Sports Illustrated, Kevin Cook is the author of Titanic Thompson, Tommy's Honor, Kitty Genovese and The Dad Report. He lives in New York City.
A head-slap of a book. Whap, yeah, that’s how it was.
— Roy Blount, Jr., author of About Three Bricks Shy of a Load and Alphabet Juice

Wired, crazy, hard-hitting, a pure winner.
— Jeff Pearlman, author of Boys Will Be Boys and Sweetness

About as subtle as a kick in the head.
— Scott Simon, NPR

Featuring arguably the greatest collection of weirdos, maniacs, misfits, heroes and villains ever gathered under any dome other than the U.S. Capitol.
— Greg Schneider - Washington Post

Kevin Cook celebrates the rough-edged heroes of the 1970s NFL, vividly re-creating some of the game’s unforgettable moments.
— Jonathan Mahler, author of Ladies and Gentlemen, the Bronx is Burning
For This Book...
Staff Pick