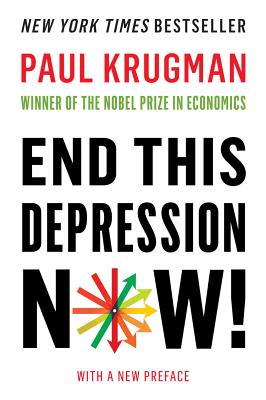 The Great Recession is more than four years old—and counting. Yet, as Paul Krugman points out in this powerful volley, "Nations rich in resources, talent, and knowledge—all the ingredients for prosperity and a decent standard of living for all—remain in a state of intense pain."

How bad have things gotten? How did we get stuck in what now can only be called a depression? And above all, how do we free ourselves? Krugman pursues these questions with his characteristic lucidity and insight. He has a powerful message for anyone who has suffered over these past four years—a quick, strong recovery is just one step away, if our leaders can find the "intellectual clarity and political will" to end this depression now.

Paul Krugman, recipient of the 2008 Nobel Prize in Economics and best-selling author, has been a columnist at The New York Times for twenty years. A Distinguished Professor at City University of New York, he lives in New York City.
Paul Krugman is stepping up to play the kind of role that John Maynard Keynes performed in the 1930s.
— Dissent

A thoroughly persuasive polemic against premature fiscal austerity in the wake of a deep recession.
— Financial Times

[Krugman] makes an urgent, even passionate case that our economic problems are, at root, fairly simple, and we have the knowledge and the tools to solve them.
— Rolling Stone

An important contribution to the current study of economics and a reason for hope that effective solutions will be implemented again.
— Kirkus Reviews