A Most Dangerous Book: Tacitus's Germania from the Roman Empire to the Third Reich (Paperback) 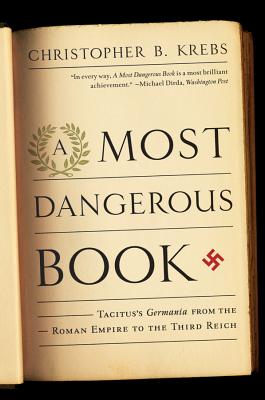 A Most Dangerous Book: Tacitus's Germania from the Roman Empire to the Third Reich (Paperback)

By Christopher B. Krebs

“A model of popular intellectual history. . . . In every way, ?A Most Dangerous Book is a most brilliant achievement.”—Washington Post

When the Roman historian Tacitus wrote the Germania, a none-too-flattering little book about the ancient Germans, he could not have foreseen that centuries later the Nazis would extol it as “a bible” and vow to resurrect Germany on its grounds. But the Germania inspired—and polarized—readers long before the rise of the Third Reich. In this elegant and captivating history, Christopher B. Krebs, a professor of classics at Harvard University, traces the wide-ranging influence of the Germania, revealing how an ancient text rose to take its place among the most dangerous books in the world.

Christopher B. Krebs, a classics professor at Harvard University, has published widely on the Roman historians and their afterlives. He lives in Somerville, Massachusetts.