Whistling Vivaldi: How Stereotypes Affect Us and What We Can Do (Paperback) 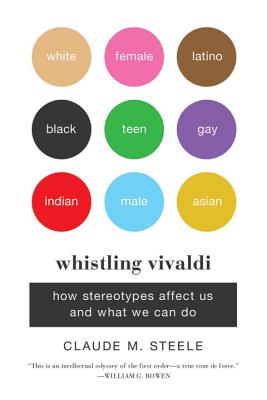 Whistling Vivaldi: How Stereotypes Affect Us and What We Can Do (Paperback)

The acclaimed social psychologist offers an insider’s look at his research and groundbreaking findings on stereotypes and identity.

Claude M. Steele, who has been called “one of the few great social psychologists,” offers a vivid first-person account of the research that supports his groundbreaking conclusions on stereotypes and identity. He sheds new light on American social phenomena from racial and gender gaps in test scores to the belief in the superior athletic prowess of black men, and lays out a plan for mitigating these “stereotype threats” and reshaping American identities.

Startles, beguiles, and challenges as it exposes the myriad ways that threats to our identities exert a powerful stranglehold on our individual and collective psyche.
— Lani Guinier, Harvard University