Fugitive Denim: A Moving Story of People and Pants in the Borderless World of Global Trade (Paperback) 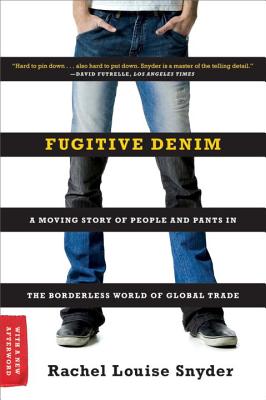 Fugitive Denim: A Moving Story of People and Pants in the Borderless World of Global Trade (Paperback)

Rachel Louise Snyder reports from the far reaches of the multi-billion-dollar denim industry in search of the people who make your clothes. From a cotton picker in Azerbaijan to a Cambodian seamstress, a denim maker in Italy to a fashion designer in New York, Snyder captures the human, environmental, and political forces at work in a complex and often absurd world. Neither polemic nor prescription, Fugitive Denim captures what it means to work in the twenty-first century.

Rachel Louise Snyder’s work has appeared in the New York Times Magazine, Slate, and the New Republic, and on public radio’s “This American Life” and “Marketplace.” She lives in Cambodia and in Chicago, Illinois.
Contains a number of surprises about the most ubiquitous of clothes. . . . Ultimately Snyder gets readers to think about the real costs of clothing, and it’s likely they won’t look at $30 or $200 jeans the same way again.
— Kathryn Masterson - Chicago Tribune

A thoughtful, ultimately hopeful look at how our choices about something as mundane as jeans can alter the lives of people 10,000 miles away.
— Fast Company