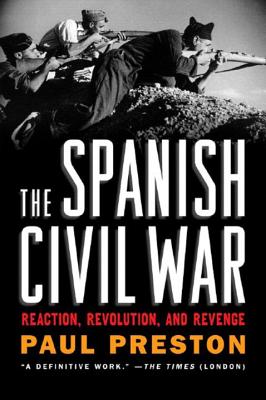 The definitive work on the Spanish Civil War, a classic of modern historical scholarship and a masterful narrative.

Paul Preston is the world's foremost historian of Spain. This surging history recounts the struggles of the 1936 war in which more than 3,000 Americans took up arms. Tracking the emergence of Francisco Franco's brutal (and, ultimately, extraordinarily durable) fascist dictatorship, Preston assesses the ways in which the Spanish Civil War presaged the Second World War that ensued so rapidly after it.

The attempted social revolution in Spain awakened progressive hopes during the Depression, but the conflict quickly escalated into a new and horrific form of warfare. As Preston shows, the unprecedented levels of brutality were burned into the American consciousness as never before by the revolutionary war reporting of Ernest Hemingway, John Dos Passos, Herbert Matthews, Vincent Sheean, Louis Fischer, and many others. Completely revised, including previously unseen material on Franco's treatment of women in wartime prisons, The Spanish Civil War is a classic work on this pivotal epoch in the twentieth century.

Paul Preston, author of The Spanish Civil War, Franco, Juan Carlos, and The Spanish Holocaust, is the world’s foremost historian on twentieth-century Spain. A professor at the London School of Economics, he lives in London.