The Ego in Freud's Theory and in the Technique of Psychoanalysis, 1954-1955 (Paperback) 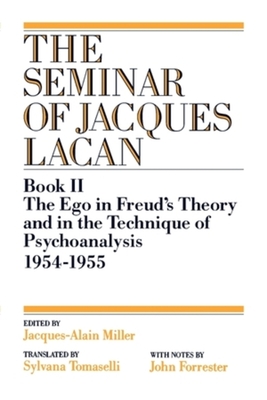 The Ego in Freud's Theory and in the Technique of Psychoanalysis, 1954-1955 (Paperback)

This is book number 2 in the Seminar of Jacques Lacan (Paperback) series.

A complete translation of the seminar that Jacques Lacan gave in the course of a year's teaching within the training programme of the Société Française de Psychanalyse. The French text was prepared by Jacques-Alain Miller in consultation with Jacques Lacan, from the transcriptions of the seminar.

This Seminar, together with Seminar I, which was published simultaneously, was worked on by both translators so as to produce uniformity in both terminology and style. Considerable attention was paid to the practices of previous translators of Lacan, in particular Anthony Wilden, Alan Sheridan, Stuart Schneiderman and Jacqueline Rose, in the hope that some consistency in the English rendition of Lacan can be achieved.

The psychoanalyst Jacques Lacan (1901-1981) was one of the twentieth century's most influential thinkers. His many published works include Ecrits and The Seminars.

Jacques-Alain Miller is Director of the Department of Psychoanalysis at the University of Paris VIII and editor of Lacan's Seminars.