A Colony in a Nation (Hardcover) 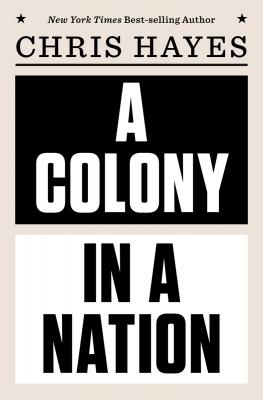 A Colony in a Nation (Hardcover)

America likes to tell itself that it inhabits a postracial world, yet nearly every empirical measure—wealth, unemployment, incarceration, school segregation—reveals that racial inequality has barely improved since 1968, when Richard Nixon became our first “law and order” president. With the clarity and originality that distinguished his prescient bestseller, Twilight of the Elites, Chris Hayes upends our national conversation on policing and democracy in a book of wide-ranging historical, social, and political analysis.

Hayes contends our country has fractured in two: the Colony and the Nation. In the Nation, we venerate the law. In the Colony, we obsess over order, fear trumps civil rights, and aggressive policing resembles occupation. A Colony in a Nation explains how a country founded on justice now looks like something uncomfortably close to a police state. How and why did Americans build a system where conditions in Ferguson and West Baltimore mirror those that sparked the American Revolution?

A Colony in a Nation examines the surge in crime that began in the 1960s and peaked in the 1990s, and the unprecedented decline that followed. Drawing on close-hand reporting at flashpoints of racial conflict, as well as deeply personal experiences with policing, Hayes explores cultural touchstones, from the influential “broken windows” theory to the “squeegee men” of late-1980s Manhattan, to show how fear causes us to make dangerous and unfortunate choices, both in our society and at the personal level. With great empathy, he seeks to understand the challenges of policing communities haunted by the omnipresent threat of guns. Most important, he shows that a more democratic and sympathetic justice system already exists—in a place we least suspect.

A Colony in a Nation is an essential book—searing and insightful—that will reframe our thinking about law and order in the years to come.

Chris Hayes is the Emmy Award–winning host of All In with Chris Hayes on MSNBC, the New York Times best-selling author of Twilight of the Elites, and an editor-at-large at The Nation. He lives in Brooklyn, New York, with his wife and children.
Hayes’s forceful analysis...compel[s] readers to wrestle with some very tough questions about the nature of American democracy and its deep roots in racism, inequality and punishment.”
— Khalil Gibran Muhammad - New York Times Book Review

A Colony in a Nation reminds us that fear of the other, when weaponized and mechanized by the state, usually makes things worse. That’s a lesson Americans of every color would do well to remember.

A Colony in a Nation is a highly original analysis of America’s arbitrary and erratic criminal justice system. Indeed, by Hayes's lights, the system is not erratic at all—it treats one group of Americans as citizens, and another as the colonized. This is an essential and ground-breaking text in the effort to understand how American criminal justice went so badly awry.

— Ta-Nehisi Coates, author of Between the World and Me

A thorough exploration of how the ‘tough on crime’ ideology leaves poor isolated minority populations living under a different set of laws.
— Patrick Sauer - Esquire

Hayes doesn’t shy away from exposing bias where he finds it, which makes this passionate and well-researched account a compelling entry in the growing literature of social injustice.
— Geoff McKenzie - O Magazine

The first significant theorization on race of the Trump era.... Hayes has a particular talent for examining rather unflinchingly our national ills.
— Matthew Pulver - Salon

Hayes is a forceful and eloquent writer…. He offers a clear and useful framework for understanding the current dysfunctions of American society. It’s a brilliant diagnosis, [and] more urgent than ever.
— Nick Romeo - Christian Science Monitor

A major book, vital for our survival as a nation.
— Charles R. Larson - Counterpunch

Writing with clarity, intelligence, and compassion, Hayes deftly illuminates the complex state of affairs that has evolved since the 1960s civil rights protests, and resulted in the current backlash.
— Carol Haggas - Booklist

A timely and impassioned argument for social justice.
— Kirkus

Important, persuasive… [A Colony in a Nation] can help Americans begin to heal.