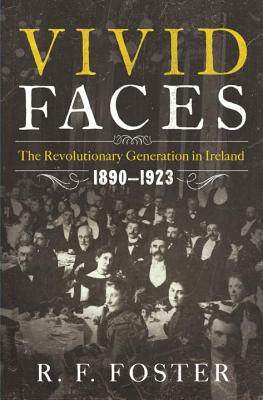 A masterful history of Ireland’s Easter Rising told through the lives of ordinary people who forged a revolutionary generation.

On Easter Monday, 1916, Irish rebels poured into Dublin’s streets to proclaim an independent republic. Ireland’s long struggle for self-government had suddenly become a radical and bloody fight for independence from Great Britain. Irish nationalists mounted a week-long insurrection, occupying public buildings and creating mayhem before the British army regained control. The Easter Rising provided the spark for the Irish revolution, a turning point in the violent history of Irish independence.

In this highly original history, acclaimed scholar R. F. Foster explores the human dimension of this pivotal event. He focuses on the ordinary men and women, Yeats’s “vivid faces,” who rose “from counter or desk among grey / Eighteenth-century houses” and took to the streets. A generation made, not born, they rejected the inherited ways of the Church, their bourgeois families, and British rule. They found inspiration in the ideals of socialism and feminism, in new approaches to love, art, and belief.

Drawing on fresh sources, including personal letters and diaries, Foster summons his characters to life. We meet Rosamond Jacob, who escaped provincial Waterford for bustling Dublin. On a jaunt through the city she might visit a modern art gallery, buy cigarettes, or read a radical feminist newspaper. She could practice the Irish language, attend a lecture on Freud, or flirt with a man who would later be executed for his radical activity. These became the roots of a rich life of activism in Irish and women’s causes.

Vivid Faces shows how Rosamond and her peers were galvanized to action by a vertiginous sense of transformation: as one confided to his diary, “I am changing and things around me change.” Politics had fused with the intimacies of love and belief, making the Rising an event not only of the streets but also of the hearts and minds of a generation.

Born in Waterford, Ireland, R. F. Foster is the Carroll Builders Professor of Irish History at Hertford College, Oxford. He is the author of Modern Ireland, the standard history, and an acclaimed biography of Yeats.
Brilliantly and vigorously reveals the personal histories that shaped the Irish revolutionary moment of the early 20th century.
— Hermione Lee - Wall Street Journal

[Foster] is well equipped to investigate the cultural context of the revolution. Drawing on a marvelous range of sources, he has succeeded in delineating this generation in half a dozen elegant thematic chapters.
— Keith Jeffery - Wall Street Journal

A deep, intricate portrait of the generation leading up to the Easter Uprising… fascinating.
— Publishers Weekly

[An] incisive history.
— The New Yorker

A fascinating, moving, but often sad account… Foster views [the nationalists] with sympathy, affection, but also with a critical eye… an outstanding tableau.
— Jay Freeman - Booklist

Telling details repeatedly inform Foster's Vivid Faces: The Revolutionary Generation in Ireland, 1890-1923, giving texture and depth to the many people filling his large canvas—while scraping away the layers of post-revolution varnish that still makes it so hard to separate mythology from history whenever discussing Ireland.

Vivid Faces is an ingenious and original account of the generation of men and women who created the conditions for revolution in Ireland in the early years of the twentieth century. By looking at social and sexual life, at private diaries, at marriages and friendships, by examining literary as well as military activity, using his brilliant historian’s intelligence, Foster has reinterpreted the 1916 Rebellion in Dublin. The result is the study of a generation who sought not only political but personal freedom, and in doing so, set about reimagining an entire nation.

— Colm Toíbín, author of The Testament of Mary

There will be many more books to mark the centenary of the Easter Rising, but none, I suspect, more stimulating and important than this one.
— Ben Macintyre - Times