So Much Things to Say: The Oral History of Bob Marley (Hardcover) 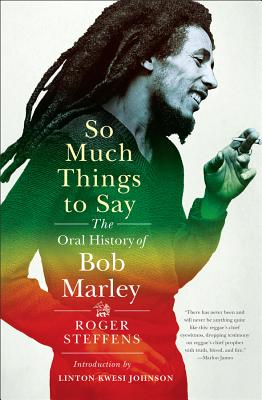 So Much Things to Say: The Oral History of Bob Marley (Hardcover)

A revelatory, myth-shattering history of one of the most influential musicians of all time, told in the words of those who knew him best.

Roger Steffens is one of the world’s leading Bob Marley experts. He toured with the Wailers in the 1970s and was closely acquainted with Bunny Wailer, Peter Tosh and the rest of the band members. Over several decades he has interviewed more than seventy-five friends, business managers, relatives and confidants—many speaking publicly for the first time. Forty years in the making, So Much Things to Say weaves this rich testimony into a definitive telling of the life of the reggae king—the full, inside account of how a boy from the slums of Kingston, Jamaica, became a cultural icon and inspiration to millions around the world.

The intimacy of the voices and the frankness of their revelations will astonish even longtime Marley fans. Readers see the intense bonds of teenage friendship among Peter, Bunny and Bob, the vibrant early sessions with the original Wailers (as witnessed by members Junior Braithwaite, Beverley Kelso and Cherry Green) and the tumultuous relationships with Rita Marley and Cindy Breakspeare.

With unprecedented candor, these interviews tell dramatic, little-known stories, from the writing of some of Marley’s most beloved songs to the Wailers’ violent confrontation involving producer Lee “Scratch” Perry, Bob’s intensive musical training with star singer Johnny Nash and the harrowing assassination attempt at 56 Hope Road in Kingston, which led to Marley’s defiant performance two nights later with a bullet lodged in his arm.

Readers witness Marley’s rise to international fame in London, his triumphant visit to Zimbabwe to sing for freedom fighters inspired by his anthems and the devastating moment of his collapse while jogging in New York’s Central Park. Steffens masterfully conducts the story of Marley’s last months, as Marley poignantly sings “Another One Bites the Dust” during the sound check before his final concert in Pittsburgh, followed by his tragic death at the age of thirty-six.

So Much Things to Say explores major controversies, examining who actually ordered the shooting attack on Hope Road, scrutinizing claims of CIA involvement and investigating why Marley’s fatal cancer wasn’t diagnosed sooner. Featuring Steffens’s own candid photographs of Marley and his circle, this magisterial work preserves an invaluable, transformative slice of music history: the life of the legendary performer who brought reggae to the international stage.

Roger Steffens is the world’s leading reggae historian, and former co-host of the award-winning radio program Reggae Beat. His programs on Marley’s life have been presented at the Smithsonian and the Library of Congress, among other venues. He lives in Los Angeles, California.
So Much Things to Say is a fascinating page-turner which leaves conclusions to the reader.

This sprawling but gripping biography is a fitting tribute to Jamaica’s favourite son.
— The Guardian

There has never been and will never be anything quite like this: Reggae's chief eyewitness, dropping testimony on Reggae's chief prophet with truth, blood, and fire.
— Marlon James, Man Booker Prize-winning author of A Brief History of Seven Killings

[So Much Things to Say] narrates the life of Marley from cradle to grave… Steffens has been on the Marley case for decades, and he’s a crucial voice in this epic chorus….Illuminating.

What emerges [from So Much Things to Say] isn’t a different Marley so much as one who feels a bit more human.

If Bob Marley is Jesus in these times, Roger Steffens is Peter.
— Carlos Santana

So Much Things to Say is by far the most important and definitive book written about Bob Marley, therefore in my opinion the best book about Jamaican music. It ranks with Mezz Mezzrow's Really the Blues masterpiece, Mike Gerber's Jazz Jews and Keith Richards' Life. It's beyond a book about music, it's a major ethnology study. Just like the best Mandela or Gandhi or Lennon biographies, it's about mankind on an anthropologic level. It's about identity, culture, pride, spirituality — it helps us understand who we really are. That's what Bob Marley was all about, and as such his brilliant works stand unparalleled in the music business.

Eyewitness to history, Roger Steffens braids his voice with all the other major players from the Bob Marley story in So Much Things to Say for a gripping, detailed, and penetrating look at one of the 20th century's greatest musicians. Jah lives.

— Joel Selvin, journalist and author of Altamont: The Rolling Stones, The Hells Angels, and the Inside Story of Rock’s Darkest Day

All true
gospels are shaped by the accounts of eyewitnesses. Roger Steffens has
collected these accounts and has given us a book of truths complicated by the
bending of memory, motive and mystery. The effect is a fresh and renewed
affirmation of Marley’s genius, humanity and mystique. This book is a triumph
of the storytelling virtuosity of Jamaican people and a testament to the care
and glorious obsessions of Roger Steffens.
— Kwame Dawes, author of City of Bones: A Testament and Bob Marley: Lyrical Genius

Roger Steffens was embedded on the road with Bob Marley and the Wailers in 1979, interviewing, photographing, witnessing as Bob morphed from a third world superstar to an international champion of human worth and dignity. So Much Things to Say is Steffens’s must-read/can’t-stop-reading account of Bob Marley’s historic career and his indelible achievements.

So Much Things to Say . . . is a fitting tribute to the tumultuous life and complex character of the country’s favorite son.

A truly definitive interpretation of the life of Bob Marley. Roger Steffens’s immense knowledge and great love for his subject shines out of every page. “Who feels it knows it,” sang Marley. Reading So Much Things to Say, you feel no one knows it more than Roger Steffens. A magnificent achievement.

Roger Steffens uncorks with remarkable clarity many lifetimes of close personal memories on the evolution of reggae's biggest ambassador. Amazingly, there are few Rashomon-like differing points of view. So Much Things To Say perfectly ferrets out his inherent humanity and complexity while revealing much important information previous biographies were unaware of. Marley's parents bridged two worlds. Steffens' brilliant and concise magnum opus, interjected with his crucial contextualizing, does more than any other book on Bob Marley to showcase the intimate and confounding detail of that tough and troubled tightrope dance. Essential reading for all.

Indispensable… A captivating and unfiltered narrative of the man, his music and his world…[and] a trove for even the most dedicated aficionado. Absolutely crucial reading!
— Dr. Matthew J. Smith, University of the West Indies

Jamaican oral history is never simple. Testimony goes from re-collection to re-collective, which brings us as close to the original as nuance will allow. Roger Steffens has expertly navigated this diversity to bring us the journey of the incredible spirit of Bob Marley.
— Dermot Hussey, Sirius/XM host and Dean of Jamaican Broadcasters

If there’s such thing as a good addiction, this book is it. For anyone who has taken the time to dig even a little bit deeper into the meaning of Bob’s music and life, to get beyond the surface level and often times inaccurate and watered down portrayal of him by the mainstream today, these firsthand accounts will twist your head into a whole new landscape of understanding. Artfully guided by Roger Steffens’s expertise and insight, you will come away with a vision of Bob that is REAL, with all the earthly complexities, contradictions, struggle and transcendent truths that complete the multifaceted prism that was Marley’s life. For any musical artist, this book will reignite the inspiration and challenge that Marley left us with: to dig deep and recommit to ‘who you are and where you stand in the struggle.
— Matt Jenson, Associate Professor of Piano and creator of ‘The Music and Life of Bob Marley’ performance studies course at Berklee College of Music

Majestic.…So Much Things to Say offers a riveting portrait—drawn from four decades of interviews with friends, family, and fellow musicians—of the Jamaican music legend.

A complete portrait… So Much Things to Say calls on many voices to recall the one iconic voice—Marley’s.

I thought I’d read all there was to know about Bob Marley, but So Much Things To Say offers fresh insights into his life and times. Steffens allows the voices—often surprising, contentious, provocative—to speak for themselves. Riveting.

Marley is not a demigod here, but an unwanted boy who fell upon the gift of brightening the world… So Much Things to Say reveals a Marley of flesh and blood.

So Much Things to Say is a major work that helps us better understand Marley’s tragic yet inspirational tale.

A landmark of reggae literature that's been 15 years
in the making. …This book, together with his collection of photographs called Family
Acid is [Steffens’] defining masterpiece, and the jewel in his crown.”
— Echoes Magazine

Crucial to the understanding of [Marley] the artist and the man….If you think you know the story of Bob Marley’s life and career from existing biographies, you’ll be amazed at how much you learn reading this book….Highly recommended!
— Chuck Foster - Reggae Festival Guide

Kaleidoscopic… [So Much Things to Say] delves deeply into Marley’s music and influences, including his politics and spirituality.

An illuminating portrait of an extraordinary life.
— Kirkus