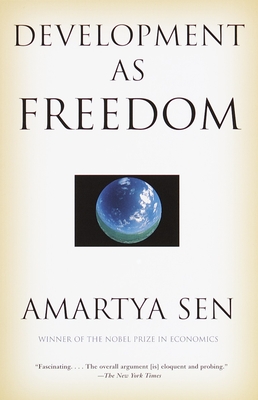 
Backordered
By the winner of the 1988 Nobel Prize in Economics, an essential and paradigm-altering framework for understanding economic development--for both rich and poor--in the twenty-first century.

Freedom, Sen argues, is both the end and most efficient means of sustaining economic life and the key to securing the general welfare of the world's entire population. Releasing the idea of individual freedom from association with any particular historical, intellectual, political, or religious tradition, Sen clearly demonstrates its current applicability and possibilities. In the new global economy, where, despite unprecedented increases in overall opulence, the contemporary world denies elementary freedoms to vast numbers--perhaps even the majority of people--he concludes, it is still possible to practically and optimistically restain a sense of social accountability. Development as Freedom is essential reading.
Amartya Sen is currently the Thomas W. Lamont University Professor and Professor of Economics and Philosophy at Harvard University. He is also a senior fellow at the Harvard Society of Fellows, a distinguished fellow of All Souls College, Oxford, an honorary fellow of Darwin College, Cambridge and a Fellow of Trinity College, Cambridge, where he previously served as Master. In 1988, he was awarded the Nobel Prize in Economic Science.
"Fascinating. . . . The overall argument [is] eloquent and probing." --The New York Times

"A new approach . . . refreshing, thoughtful, and human. Sen's optimism and no-nonsense proposals leave one feeling that perhaps there is a solution." --Business Week

"The . . . perspective that Mr. Sen describes and advocates has great attractions.  Chief among them is that, by cutting through the sterile debate for or against the market, it makes it easier to ask sharper questions about public policy." --The Economist