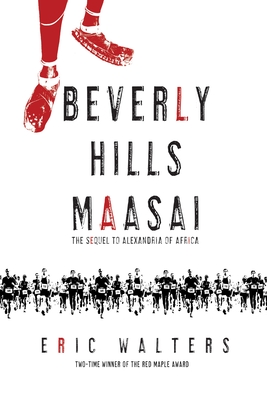 
Special Order—Subject to Availability
In his sequel to Alexandria of Africa, Eric Walters brings exciting new characters to life, with the urban jungle of Los Angeles as their backdrop.

It's the ultimate clash of cultures when Nebala, a Maasai warrior, leaves behind Kenya and, with two fellow Maasai, and crosses the world to compete in a marathon in the most famous zip code in the world: Beverly Hills, California. Reunited with their friend Alexandria, now their guide to strange, new surroundings, the trio are confronted with life in fast-paced, extravagant Beverly Hills, and customs and attitudes the Maasai find by turns baffling and amusing. Beverly Hill Maasai is another heartwarming, fast-paced, and thought-provoking novel from one of Canada's most popular young adult writers.
ERIC WALTERS' young adult novels have won numerous awards, including the Silver Birch, Blue Heron, Red Maple, Snow Willow, and Ruth Schwartz Awards, and have received honours from UNESCO's international award for Literature in the Service of Tolerance. He lives in Mississauga, Ontario.
Praise for We All Fall Down:
"We All Fall Down will be a useful teaching tool for opening up discussion in a number of areas. . . . Compelling and emotionally wringing."
— Quill & Quire