Wayne and Ford: The Films, the Friendship, and the Forging of an American Hero (Hardcover) 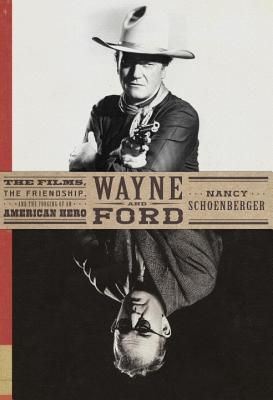 Wayne and Ford: The Films, the Friendship, and the Forging of an American Hero (Hardcover)


Backordered
John Ford and John Wayne, two titans of classic film, made some of the most enduring movies of all time. The genre they defined—the Western—and the heroic archetype they built still matter today.

For more than twenty years John Ford and John Wayne were a blockbuster Hollywood team, turning out many of the finest Western films ever made. Ford, known for his black eye patch and for his hard-drinking, brawling masculinity, was a son of Irish immigrants and was renowned as a director for both his craftsmanship and his brutality. John “Duke” Wayne was a mere stagehand and bit player in “B” Westerns, but he was strapping and handsome, and Ford saw his potential. In 1939 Ford made Wayne a star in Stagecoach, and from there the two men established a close, often turbulent relationship.
Their most productive years saw the release of one iconic film after another: Rio Grande, The Quiet Man, The Searchers, She Wore a Yellow Ribbon, The Man Who Shot Liberty Valance. But by 1960 the bond of their friendship had frayed, and Wayne felt he could move beyond his mentor with his first solo project, The Alamo. Few of Wayne’s subsequent films would have the brilliance or the cachet of a John Ford Western, but viewed together the careers of these two men changed moviemaking in ways that endure to this day. Despite the decline of the Western in contemporary cinema, its cultural legacy, particularly the type of hero codified by Ford and Wayne—tough, self-reliant, and unafraid to fight but also honorable, trustworthy, and kind—resonates in everything from Star Wars to today’s superhero franchises.
Drawing on previously untapped caches of letters and personal documents, Nancy Schoenberger dramatically narrates a complicated, poignant, and iconic friendship and the lasting legacy of that friendship on American culture.
NANCY SCHOENBERGER is a professor of English and director of creative writing at the College of William and Mary. She is the author of Dangerous Muse: The Life of Lady Caroline Blackwood and coauthor with Sam Kashner of books on Oscar Levant; George Reeves; and the love affair, marriages, and working relationship of Elizabeth Taylor and Richard Burton. Also the author of three award-winning books of poetry, Schoenberger divides her time between Williamsburg, Virginia, and New York City.
"A swiftly paced, elegantly written book."
—New York Times Book Review

"A top-notch new book about the Wayne-Ford Westerns . . . Schoenberger efficiently details the lives and careers of the men, including on-set anecdotes as well as sharp critical observations . . . [Wayne and Ford] impresses with its insightful, enthusiastic appraisal of a cinematic collaboration par excellence."
—Columbus Dispatch

"Arguably, no collaboration has been more fulfilling for audiences or more influential for narrative filmmakers than John Wayne and John Ford . . . [Wayne and Ford] serves as a lean and energetic introduction to a pair of moviemakers who are central to understanding American cinema."
—Associated Press

"A wide-ranging exploration of Westerns, the evolution of the film business and the meaning of masculinity that never loses sight of its central theme: the making and unmaking of a great partnership."
—Hollywood Reporter

“For a tightly focused study of two men and a handful of movies they made together, Wayne and Ford covers an awful lot of ground. We see the Western genre mature, perspectives on the myths of the Wild West shift, and ideas of masculinity interrogated and recast on the big screen. John Wayne’s life and work, especially, have an elegiac quality here that contemporary accounts missed . . . A fascinating two-hander.”
—William Finnegan, Pulitzer Prize-winning author of Barbarian Days

“A closely-observed and supremely engaging account of a difficult friendship and an inspired creative partnership. Whether dissecting a particular film or commenting on the American Western as a genre, Nancy Schoenberger consistently has interesting and original things to say. Half-elegy, half-cutting-edge analysis, this is a book for anyone interested in film and the ways in which it reflects and effects the larger culture around it.”
—Daphne Merkin, author of This Close to Happy

“Nancy Schoenberger analyzes and dissects the intricate blend of pride, dignity, courage, and violence that defines American masculinity as depicted in Ford’s films and embodied by Wayne’s characters. And she locates the hidden depths of vulnerability and self-doubt that help to explain and humanize these brilliant, troubled icons.”
—Glenn Frankel, Pulitzer Prize-winning journalist and author of The Searchers: The Making of an American Legend and High Noon: The Hollywood Blacklist and the Making of an American Classic

"This look into the films of Ford and Wayne and their friendship and why it eventually became tattered is a provocative addition to Hollywood history."
—Booklist
For This Book...
Staff Pick