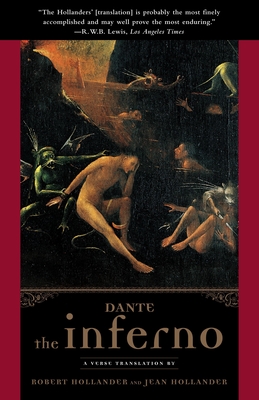 
In Stock—Click for Locations
“Probably the most finely accomplished and ... most enduring" translation (Los Angeles Times Book Review) of this essential work of world literature—from a renowned scholar and master teacher of Dante and an accomplished poet.

“The Hollanders … act as latter-day Virgils, guiding us through the Italian text that is printed on the facing page.” —The Economist

The epic grandeur of Dante’s masterpiece has inspired readers for 700 years, and has entered the human imagination. But the further we move from the late medieval world of Dante, the more a rich understanding and enjoyment of the poem depends on knowledgeable guidance. Robert Hollander and Jean Hollander have written a beautifully accurate and clear verse translation of the first volume of Dante’s epic poem, the Divine Comedy. Featuring the original Italian text opposite the translation, this edition also offers an extensive and accessible introduction and generous commentaries that draw on centuries of scholarship as well as Robert Hollander’s own decades of teaching and research. The Hollander translation is the new standard in English of this essential work.

ROBERT HOLLANDER taught Dante’s Divine Comedy to Princeton students for forty-two years, and is the author of a dozen books and more than seventy articles on Dante, Boccaccio, and other Italian authors. He is Professor in European Literature Emeritus at Princeton and the founding director of both the Dartmouth Dante Project and the Princeton Dante Project. He has received many awards, including the gold medal of the city of Florence and the gold florin of the Dante Society of America, in recognition of his work on Dante. JEAN HOLLANDER has taught literature and writing at Brooklyn College, Columbia University, Princeton University, and the College of New Jersey, where she was director of the Writers’ Conference for twenty-three years.

“The most accessible and the closest to the Italian … with ample commentary easily and unobtrusively available at the end of each Canto.” —Tim Parks, The New Yorker

“The Hollanders … act as latter-day Virgils, guiding us through the Italian text that is printed on the facing page.” —The Economist

“Probably the most finely accomplished and may well prove the most enduring…. The annotation … is crowded with useful insights and bits of information and keeps us abreast of scholarly opinion across the ages.” —Los Angeles Times Book Review