The Colony of Unrequited Dreams: A Novel (Paperback) 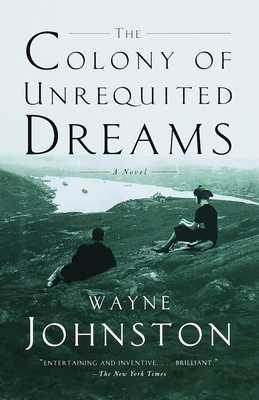 The Colony of Unrequited Dreams: A Novel (Paperback)


Not On Our Shelves—Ships in 1-5 Days
A mystery and a love story spanning five decades, The Colony of Unrequited Dreams is an epic portrait of passion and ambition, set against the beautiful, brutal landscape of Newfoundland.

In this widely acclaimed novel, Johnston has created two of the most memorable characters in recent fiction: Joey Smallwood, who claws his way up from poverty to become New Foundland's first premier; and Sheilagh Fielding, who renounces her father's wealth to become a popular columnist and writer, a gifted satirist who casts a haunting shadow on Smallwood's life and career.

The two meet as children at school and grow to realize that their lives are irreversibly intertwined, bound together by a secret they don't know they share. Smallwood, always on the make, torn between love of country and fear of failure, is as reluctant to trust the private truths of his heart as his rival and savior, Fielding--brilliant, hard-drinking, and unconventionally sexy. Their story ranges from small-town Newfoundland to New York City, from the harrowing ice floes of the seal hunt to the lavish drawing rooms of colonial governors, and combines erudition, comedy, and unflagging narrative brio in a manner reminiscent of John Irving and Charles Dickens. A tragicomic elegy for the "colony of unrequited dreams" that is Newfoundland, Wayne Johnston's masterful tribute to a people and a place establishes him as a novelist who is as profound as he is funny, with an impeccable sense of the intersection where private lives and history collide.
Wayne Johnston is the author of four previous novels, including The Divine Ryans. Born and raised in Newfoundland, Johnston now lives in Toronto. His memoir, Baltimore's Mansion, will be published by Doubleday in Summer 2000.
"A novel of cavernous complexity that nevertheless doesn't overwhelm the reader, who can repose in pure narrative without second thoughts--[an] eloquent anti-epic."--Luc Sante, New York Times Book Review

"Charles Dickens would have greatly admired Johnston's style and humor--And the old master would have envied the vivid scenes Johnston draws of Smallwood's impoverished boyhood."--Houston Chronicle

"Brilliantly realized--There's an epic quality to The Colony of Unrequited Dreams, and it may well be referred to, before long, as the quintessential Newfoundland novel."--San Diego Union Tribune

"Wayne Johnston is a brilliant and accomplished writer and his Newfoundland--boots and boats, rough politics and rough country, history and journalism during the wild Smallwood years is vivid and sharp."--Annie Proulx