Even When You Lie to Me (Hardcover) 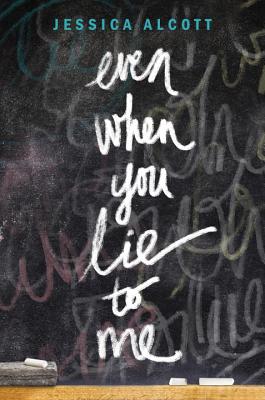 Even When You Lie to Me (Hardcover)


Special Order—Subject to Availability
A steamy debut about a love off limits, and lines destined to be crossed—with the wit of John Green and the heart of Sarah Dessen.

Tom Drummond is the perfect guy. He reads the classics. He tells the wittiest jokes. Best of all, he actually likes Charlie. And for a girl used to being caught in the shadow of her best friend, Drummond’s spotlight warms Charlie in a way she never thought possible. But as their relationship grows closer, there’s one detail that remains impossible to forget: Mr. Drummond is her teacher.

“Jessica Alcott’s writing is like a very personal glimpse into your own adolescent diary. Raw, uncomfortable, but still often hilarious.” –Harried Reuter Hapgood, author of The Square Root of Summer

“The witty repartee among characters is reminiscent of the dialogue in John Green’s novels or a Gilmore Girls episode.” –School Library Journal

Jessica Alcott lives with her husband and their two cats. She graduated from Bennington College and has worked at a children’s publisher in the UK. Even When You Lie to Me is her first novel. You can visit Jessica online at jessicaalcott.com, on Twitter at @daisyhellcakes, and on Facebook.