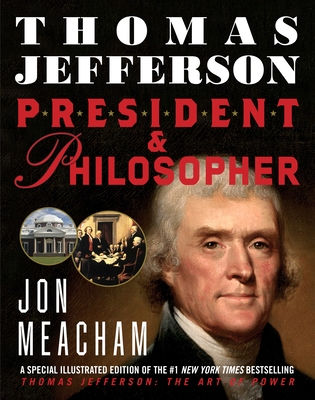 
Not On Our Shelves—Ships in 1-5 Days
In this special illustrated edition of the #1 New York Times bestselling Thomas Jefferson: The Art of Power by Pulitzer Prize–winning author Jon Meacham, young readers will learn about the life and political philosophy of one of our Founding Fathers. This book is a must-read for President's Day!

Thomas Jefferson was the third president of the United States. He was one of the authors of the Declaration of Independence. But he was also a lawyer and an ambassador, an inventor and a scientist. He had a wide range of interests and hobbies, but his consuming interest was the survival and success of the United States.

This book contains a note from Meacham and over 100 archival illustrations, as well as sections throughout the text about subjects such as the Boston Tea Party, the Library of Congress, and Napoléon Bonaparte. Additional materials include a time line; a family tree; a Who’s Who in Jefferson’s world; sections on Jefferson’s original writings and correspondence, “inventions,” interests, places in Jefferson’s world, finding Jefferson in the United States today, additional reading, organizations, and websites; notes; a bibliography; and an index. This adaptation, ideal for those interested in American presidents, biographies, and the founding of the American republic, is an excellent example of informational writing and reflects Meacham’s extensive research using primary source material.

“There is a surprising paucity of books about Jefferson at this level and this handsome, well-written, and engaging volume fills that literary gap.” –Horn Book

“Wonderfully written and crafted... Entertaining for both kids and adults alike.” –KidsReads.com

Jon Meacham is the author of Thomas Jefferson: The Art of Power and American Lion, his Pulitzer Prize–winning biography of Andrew Jackson, as well as the bestsellers American Gospel and Franklin and Winston. He is an executive editor at Random House. He and his wife live with their three children in Nashville and Sewanee, Tennessee.