King Solomon's Table: A Culinary Exploration of Jewish Cooking from Around the World: A Cookbook (Hardcover) 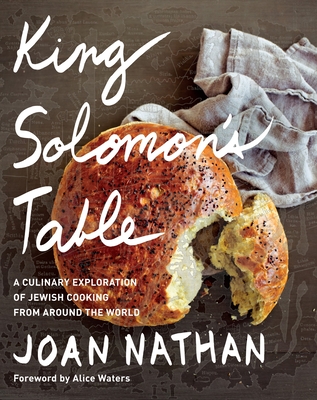 King Solomon's Table: A Culinary Exploration of Jewish Cooking from Around the World: A Cookbook (Hardcover)


In Stock—Click for Locations
A definitive compendium of Jewish recipes from around the globe and across the ages, from the James Beard Award-winning, much-loved cookbook author and “the queen of American Jewish cooking” (Houston Chronicle)

Driven by a passion for discovery, the biblical King Solomon is said to have sent emissaries on land and sea to all corners of the ancient world, initiating a mass cross-pollination of culinary cultures that continues to bear fruit today. With Solomon’s appetites and explorations in mind, in these pages Joan Nathan gathers together more than 170 recipes, from Israel to Italy to India and beyond.

Here are classics like Yemenite Chicken Soup with Dill, Cilantro, and Parsley; Slow-Cooked Brisket with Red Wine, Vinegar, and Mustard; and Apple Kuchen as well as contemporary riffs on traditional dishes such as Smoky Shakshuka with Tomatoes, Peppers, and Eggplant; Double-Lemon Roast Chicken; and Roman Ricotta Cheese Crostata. Here, too, are an array of dishes from the world over, from Socca (Chickpea Pancakes with Fennel, Onion, and Rosemary) and Sri Lankan Breakfast Buns with Onion Confit to Spanakit (Georgian Spinach Salad with Walnuts and Cilantro) and Keftes Garaz (Syrian Meatballs with Cherries and Tamarind).

Gorgeously illustrated and filled with fascinating historical details, personal histories, and delectable recipes, King Solomon’s Table showcases the dazzling diversity of a culinary tradition more than three thousand years old.
JOAN NATHAN is the author of numerous cookbooks, including Jewish Cooking in America and The New American Cooking, both of which won the James Beard Award and the IACP Award for best cookbook of the year. She was the host of the nation­ally syndicated PBS television series Jewish Cooking in America with Joan Nathan, based on the book. A frequent contributor to The New York Times, Tablet magazine, and other publications, Nathan is the recipient of numerous awards, including James Beard’s Who’s Who of Food and Beverage in America, Les Dames d’Escoffier’s Grande Dame Award, and Food Arts magazine’s Silver Spoon Award, and she received an honorary doctorate from the Spertus Institute of Jewish Culture in Chicago. She was Guest Curator of Food Culture USA for the 2005 Smithsonian Folklife Festival, and a founding member of Les Dames d’Escoffier, and appointed to the Kitchen Cabinet of the National Museum of American History. Born in Providence, Rhode Island, Nathan graduated from the University of Michigan with a master’s degree in French literature and earned a master’s in public administration from Harvard University. For three years she lived in Israel, where she worked for Mayor Teddy Kollek of Jerusalem. In 1974, working for Mayor Abraham Beame in New York, she cofounded the Ninth Avenue Food Festival. The mother of three grown children, Nathan lives in Washington, D.C., and on Martha’s Vineyard with her hus­band, Allan Gerson.
Winner of the IACP Award for Best International Cookbook • Winner of a Gourmand World Cookbook Award

“A tour de force of Jewish cooking from around the globe. . . . A rich tome that bounces from country to country, recipe to recipe, drawing connections all along the way. . . . Nathan serves as a modern emissary, gathering recipes and stories from all around of the globe.” —Tim Carman, The Washington Post

“A brilliant look at a culture that has adapted to and influenced nearly every region in the world. . . . King Solomon’s Table: A Culinary Exploration of Jewish Cooking from Around the World is a winding journey through the foods of the Jewish diaspora, from Roman ghettos to Middle Eastern markets to homestyle flavors in Cuba.” —Eater

“I admire the way Joan Nathan deftly weaves together small personal stories with great historical narratives whilst always making sure our appetites are properly whet and scrumptious food is on offer. In essence, this is the secret of every good host and it is also what makes this such a generous cookbook.” —Yotam Ottolenghi, author of Plenty and Jerusalem

“A crowning achievement. Six years in the making, [King Solomon’s Table] is filled with recipes from all over the globe, the stories behind them, and the histories of both how Jews influenced the local cultures they were part of and how those cultures left indelible marks on Jewish cuisine. . . . A cookbook with recipes for all occasions.” —Bloomberg

“A mix of deep historical research combined with personal anecdotes . . . King Solomon’s Table: A Culinary Exploration of Jewish Cooking From Around the World, combines Nathan’s celebrated knowledge of all things related to Jewish food with her accessible storytelling voice.” —Los Angeles Times

“Nathan tells a story that’s weightier than her recipes’ measurements. . . . By looking back thousands of years to trace global influences on Jewish cuisine, [she] discovered a lesson for today. She found that what we think of as Jewish food, from the matzo ball to the bagel, tells a larger story of expulsions, wanderings and explorations across borders. In other words, immigration.” —Minneapolis Star Tribune

“Long before Michael Solomonov or Alon Shaya made it big, Nathan played a major role in popularizing Jewish cooking in America. . . . King Solomon’s Table is named after a biblical figure, and her 170 recipes are globally inspired (so not just Israeli). How about Sri Lankan breakfast buns with onion confit, or Syrian meatballs with cherries and tamarind?” —Grubstreet

“Over the last four decades, Joan has become the most important preservationist of Jewish food traditions, researching and honoring the rich heritage that has connected people for millennia. I still marvel at her devotion, which is so evident in this book. . . . She is a clear-voiced storyteller and food writer who takes us on little journeys that bring each dish to life. . . . This is what makes King Solomon’s Table so important, and such a pleasure to read: Joan celebrates both the diversity and unexpected commonalities of these foods from around the world. And she shows us how simple, beautiful and real food can bring us all together, around the table and across the globe, forming the heart of our communities.” —from the Foreword by Alice Waters

“A dizzying, exhilarating ride through the myriad kitchens and countries that collectively tell the story of global Jewish cuisine. . . . What makes King Solomon’s Table truly great is the same thing that has made all of Joan Nathan’s previous cookbooks great: Nathan herself. Her zest for exploration and passion for bringing people together through their stories is unrivaled.” —Leah Koenig, Tablet Magazine

“It seems that all the scholarship and experience of beloved and acclaimed Washington author Joan Nathan culminate in King Solomon’s Table. . . . One dives into [it] knowing that the notes accompanying each recipe will be as enriching as the dishes themselves—a testament to the author’s prowess as a culinary historian and chronicler of Jewish cooks. . . . If the author never produces another cookbook—and we hope that’s not the case—you would think she had been saving the best for last.” —Bonnie S. Benwick, The Washington Post

“There is no greater authority on Jewish cooking than Joan Nathan. King Solomon’s Table is a comprehensive guide to global Jewish cooking that is approachable, informative, and mouth-watering. Joan’s confidence and perspective truly shine in this must have cookbook!” —Michael Solomonov, author of Zahav: A World of Israeli Cooking

“With a taste of just a single dish from a Jewish family’s table at Passover, Joan Nathan can tell a global story. The Jewish cooking legend, who has nearly a dozen books to her name, has documented the worldwide reach of Jewish food for her latest, King Solomon’s Table.” —“All Things Considered,” NPR

“A delightful collection of recipes from around the Jewish Diaspora, sprinkled with a fascinating medley of historical facts, personal stories and biblical quotes about dishes that date back millennia. . . . A beautiful book.” —Haaretz

“Thoroughly researched. . . . Like the book’s namesake, King Solomon, who reportedly had hundreds of wives, Jewish cooking turns out to be somewhat libertine, wildly scooping up traditional flavors and remixing them with available ingredients over centuries of settlement and relocation.” —The Philadelphia Inquirer

“A reminder of why good cookbooks are a thing to cherish. [The book’s] message about the vast contributions of immigrants to their adopted homelands is particularly relevant. . . . Just as Jews are diverse across the globe, traditional Jewish food has adapted to the native plants and proteins found where observant emigres settled.” —Raleigh News & Observer

“A fascinating gastronomic journey crossing continents and centuries. . . . Filled with scholarly research and historical references, this is a book for both the kitchen and night table (not to mention to use as a reference for every Jewish holiday.) The lovely photographs, (by Gabriela Herman), make your mouth water. . . . There is much to learn amidst its beautiful, satiny 382 pages.” —Rozanne Gold, The Huffington Post

“The reigning queen of Jewish cookery, Joan Nathan, takes her readers on a culinary voyage thousands of years in the making in her new cookbook. . . . [King Solomon’s Table] is brimming with the history of the Jewish people and their diaspora through Europe and eventually to America, and it provides recipes for the food traditions they developed along the way.” —The Columbus Dispatch

“One of those cookbooks that you’ll stay up all night reading cover to cover.” —The Forward

“This cookbook is a big deal. . . . Nathan offers the ultimate north-to-south, east-to-west compendium of Jewish cuisine, amassed through travel and conversations in 15 countries and five continents. . . . The 170 recipes aside, what will grab attention are the stories and chefs (home and professional) featured on almost every page.” —Booklist (starred review)

“Masterful. . . . There’s a joyousness in her writing and an approach that’s infectious.” —The Jewish Week

“A cookbook to be read and savored for its stories as much as its recipes. . . . An important contribution to Jewish history and culture. . . . In this, one of her best books to date, Nathan, a James Beard Award-winning author and authority on Jewish food, explores the origins and evolution of Jewish cuisine around the world.” —Publishers Weekly (starred review)

“Nathan has done more than perhaps anyone to popularize Jewish cooking in America. . . . [Her] voracious appetite for stories shines through every anecdote and historical gem in the book. King Solomon’s Table is as much a kitchen reference guide as it is a page-turner about Jewish history and culture told through food.” —Jewish Journal
For This Book...
Video