A Breath of Snow and Ashes (Outlander #6) (Paperback) 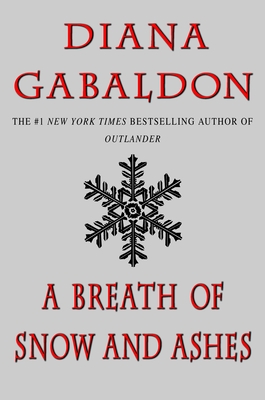 A Breath of Snow and Ashes (Outlander #6) (Paperback)

This is book number 6 in the Outlander series.

“The large scope of the novel allows Gabaldon to do what she does best, paint in exquisite detail the lives of her characters.”—Booklist

The year is 1772, and on the eve of the American Revolution, the long fuse of rebellion has already been lit. Men lie dead in the streets of Boston, and in the backwoods of North Carolina, isolated cabins burn in the forest.

With chaos brewing, the governor calls upon Jamie Fraser to unite the backcountry and safeguard the colony for King and Crown. But from his wife Jamie knows that three years hence the shot heard round the world will be fired, and the result will be independence—with those loyal to the King either dead or in exile. And there is also the matter of a tiny clipping from The Wilmington Gazette, dated 1776, which reports Jamie’s death, along with his kin. For once, he hopes, his time-traveling family may be wrong about the future.
Diana Gabaldon is the #1 New York Times bestselling author of the wildly popular Outlander novels—Outlander, Dragonfly in Amber, Voy­ager, Drums of Autumn, The Fiery Cross, A Breath of Snow and Ashes (for which she won a Quill Award and the Corine International Book Prize), An Echo in the Bone, Written in My Own Heart’s Blood, and Go Tell the Bees That I Am Gone—as well as the related Lord John Grey books, Lord John and the Private Matter, Lord John and the Brotherhood of the Blade, Lord John and the Hand of Devils, and The Scottish Prisoner; a collection of novellas, Seven Stones to Stand or Fall; three works of nonfiction, “I Give You My Body . . .” and The Outlandish Com­panion, Volumes 1 and 2; the Outlander graphic novel The Exile; and The Official Outlander Coloring Book. She lives in Scottsdale, Arizona, with her husband.
“The sixth instalment of the adventures of Claire and Jamie Fraser, already number one on the bestseller list, is a whopping 980 pages of action-packed escapism. It also has surprisingly melancholy and insightful views on the experience of growing old and dealing with the losses that entails…. One of the things that sets Gabaldon apart from other romance writers is exhaustive research of the times in which her characters live, so evident in her attention to period detail…. plot lines and stand-alone yarns are expertly woven together with the overall theme of impending doom and the question of predetermination.” —Toronto Star

“Fans of Diana Gabaldon’s popular Outlander series have another rousing historical-science-fiction-romance novel to savour in A Breath of Snow and Ashes…. For fans, this book is another slam-dunk hit. It’s a massive, long-lasting source of entertainment.” —Gazette (Montreal)