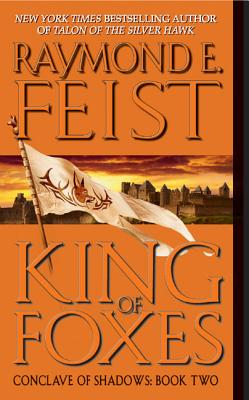 This is book number 2 in the Conclave of Shadows series.

Rescued, recruited, and trained by the mysterious Conclave of Shadows, Tal Hawkins, hero of Talon of the Silver Hawk has become one of their most effective operatives. But to destroy the nemesis who annihilated his people, the evil Duke of Olasko, Tad must sell his soul. Masquerading as a noble from the far western territory of the Kingdom of the Isles, he must insinuate himself into the duke’s confidence and carry out his most heinous and dangerous commands—even though it means betraying his own moral code.

Driven to the brink, Tal eventually defies the duke—and is imprisoned and left to die in the Fortress of Despair. But the determined young man will not be beaten. Alone, armed only with his courage and wits, Tal makes a daring escape. Returning to Olasko, he will finally brings revenge on his hated enemy.

Raymond E. Feist is the author of more than thirty previous books, including the internationally bestselling “Riftwar Cycle” of novels set in his signature world of Midkemia, as well as a standalone novel, Faerie Tale. The Firemane Saga is his first all-new epic fantasy series. He lives in San Diego, California.