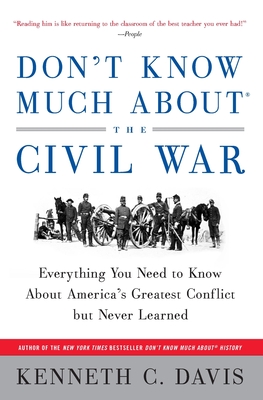 “Highly informative and entertaining…propels the reader light years beyond dull textbooks and Gone with the Wind.”
—San Francisco Chronicle

It has been 150 years since the opening salvo of America’s War Between the States. New York Times bestselling author Ken Davis tells us everything we never knew about our nation’s bloodiest conflict in Don’t Know Much About ® the Civil War—another fascinating and fun installment in his acclaimed series.

Kenneth C. Davis is the New York Times bestselling author of A Nation Rising; America's Hidden History; and Don't Know Much About® History, which spent thirty-five consecutive weeks on the New York Times bestseller list, sold more than 1.7 million copies, and gave rise to his phenomenal Don't Know Much About® series for adults and children. A resident of New York City and Dorset, Vermont, Davis frequently appears on national television and radio and has been a commentator on NPR's All Things Considered. He blogs regularly at www.dontknowmuch.com.