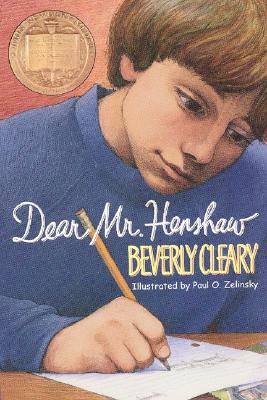 Beverly Cleary’s timeless Newbery Medal-winning book explores difficult topics like divorce, insecurity, and bullying through the thoughts and emotions of a sixth-grade boy as he writes to his favorite author, Boyd Henshaw.

After his parents separate, Leigh Botts moves to a new town with his mother. Struggling to make friends and deal with his anger toward his absent father, Leigh loses himself in a class assignment in which he must write to his favorite author. When Mr. Henshaw responds, the two form an unexpected friendship that will change Leigh’s life forever.

From the beloved author of the Henry Huggins, Ramona Quimby, and Ralph S. Mouse series comes an epistolary novel about how to navigate and heal from life’s growing pains.

Beverly Cleary is one of America's most beloved authors. As a child, she struggled with reading and writing. But by third grade, after spending much time in her public library in Portland, Oregon, she found her skills had greatly improved. Before long, her school librarian was saying that she should write children's books when she grew up.

Instead she became a librarian. When a young boy asked her, "Where are the books about kids like us?" she remembered her teacher's encouragement and was inspired to write the books she'd longed to read but couldn't find when she was younger. She based her funny stories on her own neighborhood experiences and the sort of children she knew. And so, the Klickitat Street gang was born!

Mrs. Cleary's books have earned her many prestigious awards, including the American Library Association's Laura Ingalls Wilder Award, presented to her in recognition of her lasting contribution to children's literature. Dear Mr. Henshaw won the Newbery Medal, and Ramona Quimby, Age 8 and Ramona and Her Father have been named Newbery Honor Books. Her characters, including Beezus and Ramona Quimby, Henry Huggins, and Ralph, the motorcycle-riding mouse, have delighted children for generations.

Paul O. Zelinsky is the illustrator of Anne Isaac's Dust Devil and creator of the now-classic interactive book called The Wheels on the Bus. His retelling of Rapunzel was awarded the 1998 Caldecott Medal. Rumpelstitlskin, Hansel and Gretel and Swamp Angel with different authors all garnered Paul a Caldecott Honor. Since 1991 Paul O. Zelinsky has lived in the same apartment with his wife Deborah in northern Brooklyn, New York.