Junie B. Jones #28: Turkeys We Have Loved and Eaten (and Other Thankful Stuff) (Paperback) 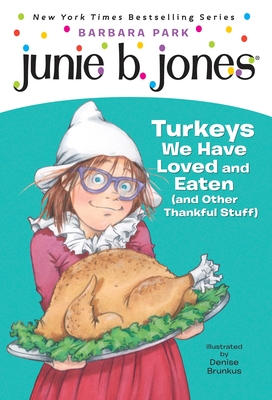 Junie B. Jones #28: Turkeys We Have Loved and Eaten (and Other Thankful Stuff) (Paperback)

This is book number 28 in the Junie B. Jones series.

Gobble, gobble! Room One is getting ready for their very own Thanksgiving feast! There's even a contest to see which room can write the best thankful list. The winners will get a pumpkin pie! Only it turns out being thankful is harder than it looks. Because Junie B. is not actually thankful for Tattletale May. Or squash. Or scratchy pilgrim costumes. And pumpkin pie makes her vomit, anyway. Will Room One win the disgusting pie? Can May and Junie B. find common ground? Or will this Thanksgiving feast turn into a Turkey Day Disaster?

BARBARA PARK (1947–2013) is beloved by millions as the author of the wildly popular Junie B. Jones series. She is also the author of award-winning middle-grade novels and picture books, including Skinnybones and Mick Harte Was Here. We are thankful for the laughter she’s given us and to millions of children.

From USA TODAY:
"Junie B. is the darling of the young-reader set."

From Kirkus Reviews:
"Junie's swarms of young fans will continue to delight in her unique take on the world....A hilarious, first-rate read- aloud."

From Booklist:
"Park, one of the funniest writers around . . . brings her refreshing humor to the beginning chapter-book set."

From Time magazine:
"Junie B. Jones is a feisty six-year-old with an endearing penchant for honesty."

From School Library Journal:
"Readers will relate instantly to the trials and tribulations of this first grader....She is always endearing and wonderfully funny."