Brush of the Gods (Hardcover) 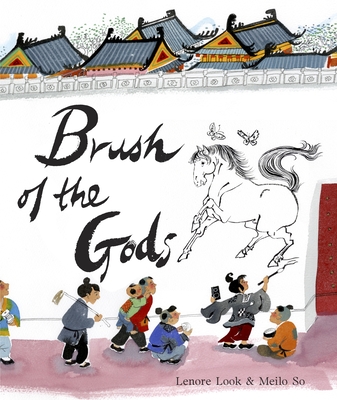 Brush of the Gods (Hardcover)

By Lenore Look, Meilo So (Illustrator)


Special Order—Subject to Availability
This gorgeous picture book biography, according to Kirkus Reviews in a starred review, is "a cheerful introduction not only to Wu Daozi, but to the power of inspiration."

Who wants to learn calligraphy when your brush is meant for so much more? Wu Daozi (689-758), known as China's greatest painter and alive during the T'ang Dynasty, is the subject of this stunning picture book. When an old monk attempts to teach young Daozi about the ancient art of calligraphy, his brush doesn't want to cooperate. Instead of characters, Daozi's brush drips dancing peonies and flying Buddhas! Soon others are admiring his unbelievable creations on walls around the city, and one day his art comes to life! Little has been written about Daozi, but Look and So masterfully introduce the artist to children.
LENORE LOOK is the author of the popular Alvin Ho series, as well as several acclaimed picture books, including Henry's First-Moon Birthday and Uncle Peter's Amazing Chinese Wedding, both of which received three starred reviews and were named ALA-ALSC Notable Children's Books. Her latest picture book is Polka Dot Penguin Pottery.

MEILO SO has illustrated many acclaimed and award-winning books, including Kate Coombs's Water Sings Blue, called "evocative" in a Publishers Weekly starred review; Janet Schulman's Pale Male, a New York Times Best Illustrated Book; and Antoine ÓFlatharta's Hurry and the Monarch.
Starred Review, Booklist, May 15, 2013:
"The richly colored artwork is stunning in both its scope and particulars...and the words are equally well chosen. This combination of talents happily never forgets its audience in an offering as child appealing and whimsical as it is handsome."

Starred Review, Kirkus Reviews, May 1, 2013:
“A cheerful introduction not only to Wu Daozi, but to the power of inspiration.”

Starred Review, School Library Journal, May 1, 2013:
“Inviting and appealing, this title serves as a great addition to a unit on ancient China or Chinese Art.”