A Night at the Opera: An Irreverent Guide to The Plots, The Singers, The Composers, The Recordings (Paperback) 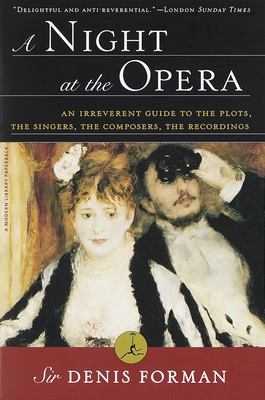 A Night at the Opera: An Irreverent Guide to The Plots, The Singers, The Composers, The Recordings (Paperback)

With an encyclopedic knowledge of opera and a delightful dash of irreverence, Sir Denis Forman throws open the world of opera—its structure, composers, conductors, and artists—in this hugely informative guide. A Night at the Opera dissects the eighty-three most popular operas recorded on compact disc, from Cilea's Adriana Lecouvreur to Mozart's Die Zauberflöte. For each opera, Sir Denis details the plot and cast of characters, awarding stars to parts that are  “worth looking out for,”  “really good,” or, occasionally, “stunning.” He goes on to tell the history of each opera and its early reception. Finally, each work is graded from alpha to gamma (although the Ring cycle gets an “X”), and Sir Denis has no qualms about voicing his opinion: the first act of Fidelio is  “a bit of a mess,” while the last scene of  Don Giovanni  “towers above the comic finales of Figaro and Così and whether or not [it] is Mozart's greatest opera, it is certainly his most powerful finale.”

The guide also presents brief biographies of the great composers, conductors, and singers. A glossary of musical terms is included, as well as Operatica, or the essential elements of opera, from the proper place and style of the audience's applause (and boos) to the use of subtitles.

A Night at the Opera is for connoisseurs and neophytes alike. It will entertain and inform, delight and (perhaps) infuriate, providing a subject for lively debate and ready reference for years to come.
Sir Denis Forman was for nine years the deputy chairman of the Royal Opera House in Covent Garden in London. He was a founding member of the Granada television franchise in the United Kingdom and became its chairman and chief executive, responsible for its acclaimed drama program, which included The Jewel in the Crown. Sir Denis lives near London.