An Area of Darkness: A Discovery of India (Paperback) 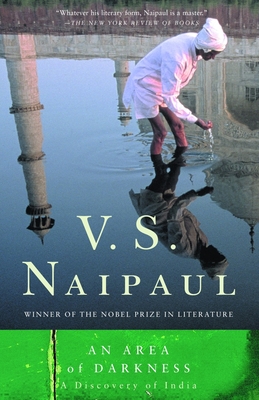 An Area of Darkness: A Discovery of India (Paperback)


Not On Our Shelves—Ships in 1-5 Days
A classic of modern travel writing, An Area of Darkness is Nobel laureate V. S. Naipaul’s profound reckoning with his ancestral homeland and an extraordinarily perceptive chronicle of his first encounter with India.
Traveling from the bureaucratic morass of Bombay to the ethereal beauty of Kashmir, from a sacred ice cave in the Himalayas to an abandoned temple near Madras, Naipaul encounters a dizzying cross-section of humanity: browbeaten government workers and imperious servants, a suavely self-serving holy man and a deluded American religious seeker. An Area of Darkness also abounds with Naipaul’s strikingly original responses to India’s paralyzing caste system, its apparently serene acceptance of poverty and squalor, and the conflict between its desire for self-determination and its nostalgia for the British raj. The result may be the most elegant and passionate book ever written about the subcontinent.
V.S. Naipaul was born in Trinidad in 1932. He came to England on a scholarship in 1950. He spent four years at University College, Oxford, and began to write, in London, in 1954. He pursued no other profession.

His novels include A House for Mr Biswas, The Mimic Men, Guerrillas, A Bend in the River, and The Enigma of Arrival. In 1971 he was awarded the Booker Prize for In a Free State. His works of nonfiction, equally acclaimed, include Among the Believers, Beyond Belief, The Masque of Africa, and a trio of books about India: An Area of Darkness, India: A Wounded Civilization and India: A Million Mutinies Now.

In 1990, V.S. Naipaul received a knighthood for services to literature; in 1993, he was the first recipient of the David Cohen British Literature Prize. He received the Nobel Prize in Literature in 2001. He lived with his wife Nadira and cat Augustus in Wiltshire, and died in 2018.
“Whatever his literary form, Naipaul is a master.” –The New York Review of Books

“This is India. I don’t know any other book that comes so near to capturing the whole crazy spectrum. . . . Brilliant.” –John Wain, The Observer

“His narrative skill is spectacular. One returns with pleasure to the slow hand-in-hand revelation of both India and himself. . . . There is a kind of displaced person who has a better sense of place than anybody: Mr. Naipaul is an outstanding example.” –The Times (London)

“[Naipaul’s] penetrating, opinionated travel writing . . . makes up a remarkable running commentary on the clash of civilizations.” –The New York Times